During the 5th One-Day International (ODI) between South Africa (SA) and Sri Lanka, JP Duminy took an excellent running catch at over cover.

The South African team is considered to be one of the best fielding sides and has produced lots of superb running catches. A running catch is never easy​ as it seems and running backwards to take a catch is something which is spectacular.

During the 5th One-Day International (ODI) between South Africa (SA) and Sri Lanka, JP Duminy took an excellent running catch at over cover. Batting first SA put up a good total of 312 runs on the board; Graeme Smith and AB de Villiers both made 125 runs. SL​ in response started off at a good pace with opening batsman Upul Tharanga looked in a good touch.

Off the last ball of the 10th over, Lonwabo Tsotsobe bowled a slower one. Tharanga looked to hit it towards the cover but ​only managed to get a thick outside edge ​to find the ball swirling in the air over cover. Duminy, fielding at point​, ​sprinted towards the boundary and dived full length to pluck the ball airborne. Having had a good opening stand, SA needed something of this to bring them back in the game as Tharanga was dismissed after scoring 46.

Later, S​ri Lanka​ managed to win the match by 2 wickets in a last over thriller but Duminy’s classic catch was one of the highlight of the match. 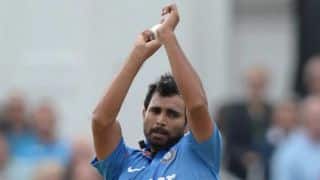