South African all-rounder JP Duminy praised Quinton De Kock on improving as a batsman and turning out to be a potential match-winner for South Africa. The wicketkeeper-batsman was declared player of the match in the first Twenty20 match at Johannesburg. 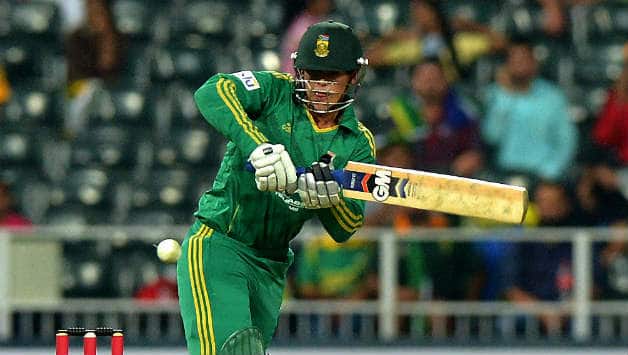 Quinton De Kock (above) opens the batting with Hashim Amla. His aggressiveness combined with Amla’s composed style has helped South Africa get off to good starts © AFP

South African all-rounder JP Duminy praised Quinton De Kock on improving as a batsman and turning out to be a potential match-winner for the team. The wicketkeeper-batsman was declared player of the match in the first Twenty20 match against Pakistan at Johannesburg.

“We have players who can do it (win games single-handedly). Look at AB de Villiers, Quinton de Kock, they have the potential to be match-winners. They’ve done it before,” Duminy was quoted as saying by IOL sport.

De Kock though had tough luck during his series in Sri Lanka, but the management persisted with him and the efforts have paid off. He also has a century to his name against Pakistan at Abu Dhabi. After an unbeaten 48 two matches before, this innings of 43 comes as another confidence-booster.

Duminy was however, quick to point out that South Africa were erratic despite a good start from opening batsmen. “We want to improve as team all the time. We were a bit below-par at the Wanderers after losing our way a bit after a good start. We’re very process driven as a team at the moment, and concentrating on doing well as a team,” he said.

Pakistan now have lost six consecutive matches against South Africa and are under pressure to deliver. The second T20 will be played on Friday in Cape Town.