South Africa will also face the West Indies in Group B of the preliminary round of the World Cup.

Port Elizabeth: South African batsman JP Duminy does not believe a whitewash of the West Indies in the ongoing One-Day International (ODI) series will have much resonance for the team when the ICC World Cup 2015 bowls off next month.

The South Africans lead the five-match series 3-0 following wins in Durban, East London and Johannesburg, and face the Caribbean side in the fourth match at St. George’s Park on Sunday, reports CMC. “We don’t want to be too blase about these recent performances ahead of a big tournament. As much you want to take a lot of confidence out of a previous series, it actually means nothing,” said Duminy. “At the end of the day it’s about how you perform on the day in the World Cup tournament. When you get into a knockout phase, it’s not about what’s happened in the past against an Australian, or Sri Lankan team. It comes down to what you’re going to produce on that day.”

Ironically, South Africa will also face the West Indies in Group B of the preliminary round, along with the likes of title-holders India, Pakistan, Zimbabwe, Ireland and the United Arab Emirates. They open their campaign against Zimbabwe in Hamilton before heading to Melbourne in Australia for their second fixture against India.

Duminy, who is returning from injury in time for the tournament, said the challenge of the World Cup was playing consistently. “In a World Cup you’re probably going to have to win back-to-back games,” he noted. “Yes, we’ve won three in a row but the challenge for us will be to go four-nil, five-nil up and put ourselves under that sort of pressure and to take that into the World Cup.” The World Cup is set to be played in 14 cities across Australia and New Zealand, from Feb 14 to March 28. 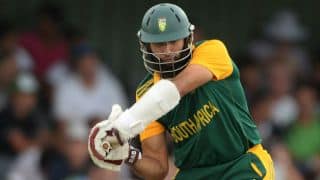