Duminy was well supported by Philander and Morne Morkel.

South Africa spared Sri Lanka from their misery on Day two of the first Test by declaring at 455 for nine. JP Duminy  got to his fourth Test century in style. The Sri Lankan attack looked unlucky in the earlier part of the day’s play and toothless as Duminy and the South African tail decided to make the hosts toil.

Coming in at No 8, Duminy was always going to find it tough with Rangana Herath and Dilruwan Perera getting turn and bounce. Vernon Philander gave good support and later it was Morne Morkel who dropped anchor with a stubborn resistance in a country where South Africa have traditionally struggled.

Post Tea, Duminy switched into slog cricket mode and got boundaries with ease as South Africa were itching to field. Eventually, the 30 year-old got to hundred and Hashim Amla called off declaration after the dismissal of Morkel.

Earlier in the day, Quinton De Kock thwarted the hosts’ attack. Spinners Perera and veteran Herath were getting quite a bit a turn and the early overs were all about getting their eye in. De Kock was showing some of his One-Day International (ODI) form which has helped him get to four hundreds in six games in his career. The southpaw cut the ball at will and those boundaries soothed the Protea nerves.

Lakmal then struck by disturbing Steyn’s stumps with a straighter one. The ball went through the ‘gate’. Duminy and De Kock then kept the scoreboard ticking. They were using their feet well but it was the 22 year-old who looked promising. Under the sweltering heat and wicked turn of the Galle wicket, De Kock’s positive intent paid off and he got to his fifty. Sri Lanka have an uphill task from here as the pitch still has enough purchase for the bowlers and Dale Steyn and co. must be licking their lips to scalp a couple of wickets before the day’s play. 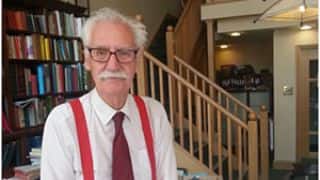