JP Duminy carried on the good work even after de Villiers's dismissal.

South Africa have ended the second session of Day Two of the second Test against Australia at 413 for the loss of eight wickets in their first innings.

After enjoying a brilliant morning session in which they didn’t lose a single wicket and added over a 100 runs, AB de Villiers finally lost his wicket to Nathan Lyon in the post-lunch session, as he handed a return catch to the spinner, who take a brilliant catch to dismiss the South African vice captain.

But the wicket of de Villiers didn’t deter JP Duminy’s hopes, who soon completed 1000 runs in Test cricket and then soon after, reached his third hundred in Test cricket. Duminy has played a brilliant knock for his team so far. Early in the morning session when de Villiers took his time to settle in, Duminy was the aggressor against the likes of Mitchell Johnson and Ryan Harris. Later when de Villiers took on the charge, he played second fiddle.

But once de Villiers lost his wicket, Duminy again shifted roles, and it is this job that he has done superbly in this innings. He has shifted modes as and how the situation required him to.

Vernon Philander didn’t last long as he too fell in a similar fashion to how de Villiers lost his wicket. He chipped a delivery off Michael Clarke straight back to the bowler who dived to take another good catch. 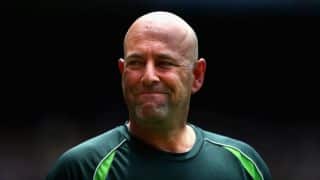