Junaid Khan has been sidelined due to a knee injury.

Pakistan fast bowler Junaid Khan is facing the prospect of being sidelined from cricket for a while after it was revealed that his knee injury was more serious than initially diagnosed. Junaid was sent home from the United Arab Emirates (UAE) without playing any match of the ongoing series against Australia due to a knee injury.

The Pakistan Cricket Board (PCB) said on Monday that apart from consultation with local orthopedic  surgeon in Pakistan, Junaid’s reports are also being seen by orthopedic surgeons abroad. “His final course of action will be decided in couple of days,” Dr Sohail Saleem, the senior manager, Medical of the PCB said.

Saleem said that MRI scans had shown a Grade 3 osteochodral fracture in his knee and there was also intra-substance degeneration within the posterior horn of the medial meniscus. “Junaid Khan is undergoing a conservative management plan for his injury but the full picture will be known in a couple of days,” Saleem said.

Another board official said that Junaid might require surgery for his injury and he was certainly out of the series against New Zealand which is to be played in November and December. But the report on the other left-arm pacer, Wahab Riaz who also returned injured midway from the Australia series, was better. Saleem said that Riaz, who also had a cartilage injury, had undergone rehabilitation and had resumed batting and also bowled a few balls in the nets.

“His work on the physio’s table consists of manual therapy techniques to achieve the desired fitness results before the beginning of the New Zealand series. I am pretty and satisfied with the progress he is making,” Saleem said. Meanwhile, the Pakistan selectors have retained the same 16-member squad for the second Test against Australia. 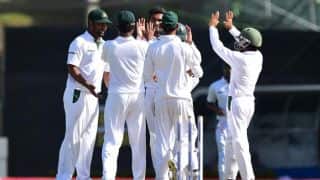 Bangladesh vs Zimbabwe 2014: Bangladesh Cricket Board announce squad for second Test against Zimbabwe