Little did Australian sports fans know that June 16, 2018 would turn out to be one of their worst in history. They ended up losing in four different sports across the world. To begin with, their cricket team lost the second ODI against England in cricket at Sophia Gardens, Cardiff, Wales by 38 runs to go 0-2 down in the 5-match series. Their Rugby Union team (the Wallabies) lost the second Test against Ireland at AAMI Park, Melbourne in a 21-26 margin (the scoreline reads 1-1 in the 3-Test series).

As if that was not enough, their football team, the Socceroos, lost their opening match of the FIFA World Cup 1-2 to France, at Kazan Arena, Russia. And at Stuttgart Open (MercedesCup), Roger Federer regained the world no. 1 spot from Rafael Nadal by beating 20th-ranked Nick Kyrgios, an Australian, 6-7, 6-2, 7-6 in the semi-final.

However, the Australians can still brush June 16 away as a nightmare and move on, for there is scope to make up. They can still win the remaining 3 ODIs to clinch the series against England. With the series levelled, a win at Allianz Stadium, Sydney will give them the Rugby Union Test series. And they stand with a chance in Russia if they beat Peru or Denmark or both.

Unfortunately, their run at Stuttgart is over. Federer is currently playing Canadian Milos Raonic in the final. 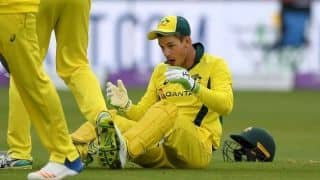