Out-of-form Pakistan batsman Azhar Ali is hopeful of a turnaround in his fortunes and feels it will take just one good innings for him to be back among the runs.

Out-of-form Pakistan batsman Azhar Ali is hopeful of a turnaround in his fortunes and feels it will take just one good innings for him to be back among the runs.

In 2018, across eight innings, Azhar has managed 95 runs that includes a score of 50 against England at Lord’s in May. He last scored a century in May 2017, against West Indies. In the first Test of the ongoing two-match series against Australia in the UAE, ali scored 18 and 4 in the two innings as the match ended in a thrilling draw on the fifth and final day in Dubai.

“I don’t think there is any psychological impact here but yes, I have had fitness issues in the past. I have worked hard and have been in the gym and I feel it is a matter of just one inning. If I can put one big score then Inshallah, everything will fall into place,” Ali said on Sunday.

Ali, who has packs an experience of 66 Tests and 5224 runs, knows what it takes to score big with patience being the keyword. “The key to batting will be to be patient and look for opportunities to score and try and absorb the pressure. It is the key even when you are facing the new ball or batting in any time of the day. The important thing is to stay focused and try and believe that once you get a good knock behind you, things will start rolling again. On these wickets, you have to take time. With the hard ball, you still manage to score, but as soon as the ball gets soft, it becomes difficult. Especially when there is wicket-to-wicket bowling, then you have to show all the more patience,” the 33-year-old said.

Pakistan will be without Imam ul Haq who fractured his finger meaning either Fakhar Zaman will be handed a Test debut or Ali will have to leave his preferred spot to open the innings alongside Mohammed Hafeez.

“When playing for Pakistan one has to be ready for everything. I have always believed in that and whatever the team management decides or the captain decides, I will be ready to do that,” he said.

The second Test starts from Tuesday in Abu Dhabi and in conditions more favourable to Pakistan, Ali felt they will be under pressure to win. “I can’t say if the pressure will be more on Pakistan or Australia but we are the home side and obviously people expect us to win and so there is pressure,” he said. “However, having said that these are favourable conditions for us and we have to make the most of it. Pressure is always different in every match and obviously this is a decider. Being the home team we have to win it and we will enter the field thinking that. We will look to play positive cricket and hopefully the result will go our way.” 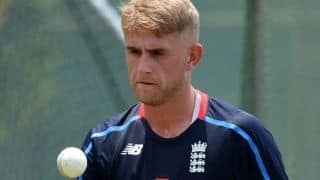