Rahul on Saturday scored 131 against Kerala a Round 4 match in Bangalore, guiding Karnataka to a 60-run win.

KL Rahul brushed aside the disappointment of India Test snub by smashing a scintillating century for Karnataka in the Vijay Hazare Trophy 2019-20. Rahul, left out of India’s two-Test series against South Africa starting October 2, scored 131 against Kerala a Round 4 match in Bangalore, guiding Karnataka to a 60-run win and propelling them to the top of the Elite Group A.

In the first game against Jharkhand, Rahul was dismissed for 29 but was determined to make it count this time around. What made Rahul’s innings even more special were to score all those runs in bowler-friendly conditions. Bangalore has witnessed rain over the last 15 days and in overcast conditions, against the moving ball, the opener struck 10 boundaries and four sixes as the rest of the batsmen barring Manish Pandey struggled to get going.

“Once I got set, wanted to make sure I carry on longer because we were only playing five specialist batsmen and three allrounders,” Rahul said after the match. “My plan was to bat till 40-45 overs, and I wanted to stick to that. I just want to stay disciplined with my shot selection, get time in the middle and enjoy my batting again. I haven’t been in the middle for a while, so just wanted to enjoy spending that time.

“Not as free-flowing as I wanted it to be. But this gives you more satisfaction as a player because you know it was not an easy wicket. You had to work hard. I had to play 100-110 balls to get that hundred. This kind of innings gives you more confidence. I want to challenge myself in difficult conditions, work on my technique, see where I’m faltering. So, to come back here and work on it, to get quality opposition and to get runs against them feels very good.”

Rahul’s innings serves a timely reminder of the quality he possesses, although his ODI and Test averages have dipped. Just 27, Rahul can slot back in the mix of things but it won’t be easy, especially with his Karnataka teammate Mayank Agarwal slowly cementing India’s opener’s slot and Rohit Sharma being tried out as a Test opener.

Rahul admitted towards needing to work hard on his game, better it in the manner only he can. A good show in the Vijay Hazare Trophy can make the selectors take notice, keeping in mind the T20 World Cup next year in Australia.

“The pace of the game is a lot slower. When you are playing international cricket, the stadiums are full all the time,” he said. “The wickets I feel are a lot better at the higher level. Here it’s a bit more challenging. If we get to bat first, then the first 10-15 overs is a bit of a challenge. It’s like playing the first session in a red-ball game. That’s also a good challenge for me because I need to work on my game. Obviously, you have to stay a lot more disciplined.” 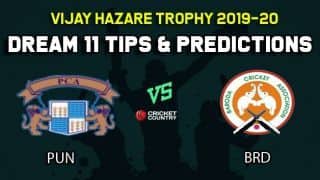