Justin Langer has opened up about "the darkest period of his life" when he was axed from the national squad in 2001.

Melbourne: Former Australian Test opener Justin Langer has opened up about “the darkest period of his life” when he was axed from the national squad in 2001. Reflecting on the toughest time of his cricketing career, the 46-year-old said he was shocked to be omitted from the Test squad in 2001, just a year after Steve Waugh had declared him the best batsman in the world. Langer batted at No.3 spot in his side’s unforgettable Border-Gavaskar series against India in February-March 2001. However, modest runs during the tour and the continued strong form of Damien Martyn saw him lose his place for the first Ashes Test in Birmingham. Justin Langer: Muttiah Muralitharan gave me more sleepless nights than anyone

And the Western Australian player admitted that he had to endure the low of being dropped by his close friend Waugh. “If I look back, it was probably the darkest period of my life actually. I got dropped from the Test team and I certainly wasn’t expecting it. Steve Waugh came to my room, knocked on my door and said, ‘Lang, you’re out of the first Test. I was shocked,” cricket.com.au quoted Langer, as saying. “Usually when you get dropped you’ve got a pretty good idea [because] you’re not playing well. But Damien Martyn had been playing so well so I was the one who got dropped,” he added. Justin Langer backs Shaun Marsh return to side in middle-order role

Although Langer had gone eight Tests without a century going into the Ashes series, he had been prolific prior to that as he scored four centuries over a period of four months against Pakistan, India and New Zealand. Langer, who was recalled in the squad for the fourth Ashes Test, bounced back strongly by piling up five hundreds and two fifties in the first seven matches following his return. Later, Langer also combined with Hayden to form the most prolific pairing in Australian Test history, scoring 6,081 runs at 51.53, with 14 century stands.

Elaborating about his recall to the national Test squad, Langer informed, ” Steve Waugh said, ‘Just hang in there Lang, you never know what could happen’. “Then out of nowhere, they dropped Michael Slater for the last Test match. “I couldn’t have been batting worse or trying harder, so I vowed to just relax and enjoy myself, and as it turned out, I opened the batting for the first time with Matthew Hayden and was lucky to score a hundred, and from there, I opened for the next few years with my great mate.” 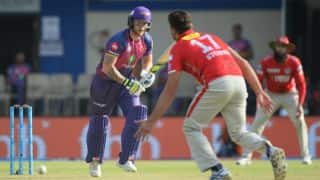