Having been an integral part of Steve Waugh and Ricky Ponting's formidable Australian sides, former opener Justin Langer knows a thing or two about what ails the country's young cricketers right now and according to him, not playing English county is one of the prime reasons. 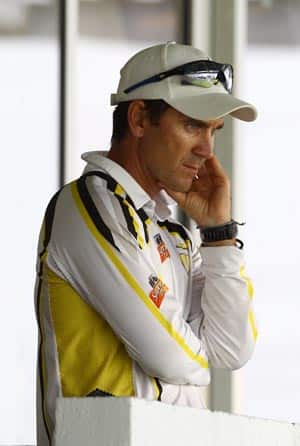 Having been an integral part of Steve Waugh and Ricky Ponting‘s formidable Australian sides, former opener Justin Langer knows a thing or two about what ails the country’s young cricketers right now and according to him, not playing English county is one of the prime reasons.

“Look I don’t want to get into a debate whether IPL is good or bad thing but most of our young players don’t go and play county cricket anymore (English County season starts when IPL is in full swing). Learning from playing English county is diminishing,” Langer, who has played 105 Test matches for Australia and has been a regular for Middlesex and Somerset, reasoned during an interaction with media.

“We (Waugh’s and Ponting’s side) were used to winning for such a long period of time that people had a lot of expectations. One needs to understand that there’s no magic dust which will transform a side. You got to be patient and give youngsters time to replace those legends. May be wait till they are 28, 29 and 30,” the 42-year-old Langer, who is the chief coach of Perth Scorchers, said.

Langer also seemed concerned with the ICC Future Tours Program and said that too much cricket is being played these days which might also lead to a sharp decline in spectators’ interest.

“It is a clear case of Law of Diminishing Returns. If you have too much cricket, people simply don’t have enough money to turn up everytime you play. Also everyday, you can watch cricket on Television in the comfort of your drawing rooms.

“Therefore, we have to be careful that we don’t saturate it. One needs to do that balancing act of juggling between formats,” said the man who has 7,696 Test runs to his credit with 23 centuries at a healthy average of 45 plus.

Asked about Australian captain Michael Clarke skipping the upcoming limited overs tour of India due to a chronic back problem, Langer defended the decision.

“Michael is one of the most disciplined cricketers that I have played and worked alongside with. Obviously, he has the return Ashes at the end of the year at the back of his mind and then you have the South Africa series. He needs to be fit by that time.”

Langer had been a batting coach with the Australian side but he is happy to have been entrusted with the role of the chief coach of a state side.

“Well, in an international team, you are always travelling and I needed to stay close to my family. The job with Western Australia gives me that chance. Also I would love to create work for cricket in Western Australia which will in turn help Cricket Australia.”

On a lighter note, he didn’t forget to mention that he is still game if one of his daughters choose talented Aussie all-rounder Ashton Agar as their husband!

“Oh yes. He scores runs, takes wickets and makes a lot of money. I don’t mind if one of my daughters dates Ashton. Also there’s Joel Paris. But two days back my daughter introduced me to her first boyfriend on Skype. It was a terrible experience for me,” Langer said in jest.