K Hariharan says the Indian umpiring standard can improve by having mentors guide the "clueless" officials.

New Delhi: Erratic umpiring has been a bane of Indian cricket and as it gets highlighted through the IPL, former international umpire K Hariharan says the standard can improve by having mentors guide the “clueless” officials. “Like the selectors are constantly watching the players from the sidelines, you have to have mentors for umpires who can monitor their performance during the game and point out their positives and negatives right after the game,” Hariharan told PTI in an interview. “As of now, there is nobody to guide Indian umpires on the domestic circuit. We all know some umpiring howlers have been committed in the IPL and that can happen, human errors happen all the time. But there should be a group of mentors to tell them after the game where they went wrong, where they went right, were they standing in the right position, things like that,” said the now-retired umpire who officiated in two Tests and 34 ODIs.

Hariharan, in fact, is part of the BCCI review committee which is supposed to periodically propose changes for improving the umpiring standards in domestic cricket. The panel comprises former umpires Vijay Chopra, I Shivram, V K Ramaswamy besides Hariharan himself. “We have already submitted our report [to the BCCI] in which we have proposed the appointment of mentors for the top 25 umpires of the country. The board will decide the future course of action,” said the 61-year-old adding that 110 umpires are certified by the BCCI at the moment.

With the IPL attracting global attention, the social media has been abuzz with posts on the embarrassing umpiring errors already committed in the competition. Especially the on-field duo of CK Nandan and Nitin Menon have had a horror tournament so far. Both of them had allowed David Warner to take strike the next over after he struck a four off the last ball of the previous over in the game between Mumbai Indians and Sunrisers Hyderabad in Mumbai.

Days before, at the same venue, the same pair was officiating on the field when Rohit Sharma was adjudged lbw despite getting a huge inside edge before the ball hit the pads. That glaring mistake prompted veteran batsman Subramaniam Badrinath to slam the prevailing umpiring standards. “Seeing a lot of domestic umpires in this seasons @IPL, and the umpiring standards have been way below par…arguably the worst. Among all #IPL seasons.poor umpiring standards have prevailed for ages in domestic circuit,its just being highlighted through #IPL2017,” Badrinath had tweeted.

Hariharan found the decision involving Warner unacceptable. “The third umpire should have stepped in that scenario. However, not hearing big edges can happen especially in the IPL where you see big noisy crowds,” he said. “Overall, I would say that Indian umpires are not bad at all. One has to keep in mind that umpires are always judged by their mistakes, not by the good decisions they make.”

Hariharan felt the advent of the Decision Review System has added to the pressure on the umpires. “I say DRS or no DRS, the umpire should be making minimum mistakes.” Internationally, Sundaram Ravi is the lone Indian umpire in the 12-member ICC elite panel including four Englishmen, three Australians, and one each from Sri Lanka, Pakistan, South Africa and New Zealand. 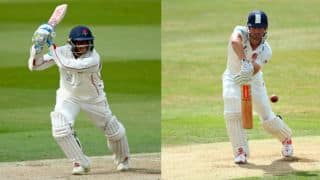