South African paceman Kagiso Rabada said he is ready to shoulder extra responsibility in the wake of Dale Steyn's shoulder injury after his man-of-the-match performance.

Perth: Young South African paceman Kagiso Rabada said he is ready to shoulder extra responsibility in the wake of Dale Steyn‘s shoulder injury after his man-of-the-match performance in the first Test victory over Australia on Monday. Strike bowler Steyn will be out for at least six months after hurting his shoulder on the second day in Perth, but he was barely missed as Rabada, 21, stepped up with a five-wicket haul in the second innings. The right-armer claimed 5-92, his fourth five-wicket haul, to guide South Africa to victory by 177 runs, bowling more deliveries than in any of his eight previous Tests. FULL CRICKET SCORECARD: Australia vs South Africa, 1st Test at Perth

“It is not nice losing the best bowler in the world and being down to two seamers, but we still had to believe,” Rabada said. “I don’t see myself as leading the attack, I know that I have a job to do and I just try to do my job. I’ve got a responsibilty to make sure I produce the goods for the country. It’s a passion and you do it for your team-mates and the people back home, because no one wants to lose and you have to try to do everything you can to win.” Proteas register 3rd consecutive victory against hosts at Perth, go one up

South African captain Faf du Plessis praised Rabada and said he shown all the signs of being a “champion bowler”. “I am incredibly proud of him and I have a lot of respect for anyone who puts their hands up and does the hard yards,” du Plessis said. “He wanted the ball and that is the sign of a champion bowler who wants to be in the fight all the time.”

Rabada was particularly pleased with his over to Adam Voges on the fourth day, when he bowled a couple of superb deliveries and then had the veteran batsman caught behind for one. “I enjoyed that over,” he said. “A new batter coming in, the ball was reversing nicely and I was feeling my best rhythm. Sometimes you get a wicket exactly how you want and it was one of those times.” Rabada also said the heavy workload didn’t concern him, as he had bowled similar amounts playing for Kent. 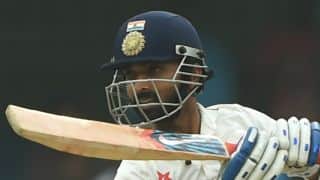