Recently, Kagiso Rabada entered the ODI rankings for bowlers for the first time and he gained the rank No. 7.

South Africa pacer Kagiso Rabada is on a roll, as after entering the top 10 of the ICC ODI rankings for bowlers, he has been nominated for multiple categories in the Cricket South Africa (CSA) awards for 2015-16. The board saw the pacer in nomination for various lists, including Cricketer of the Year, Test and ODI Cricketer of the Year, the KFC So Good Award and Delivery of the Year. The ceremony will take place on July 26 at Sandton Convention Centre, after CSA’s 25-Year Anniversary Dinner. After making his international debut in 2014, Rabada has so far claimed 24 wickets from 6 Tests at an average of 24.70. However, Rabada has made his mark in limited-overs formats, bagging 37 wickets in 20 ODIs at 21.45 and 22 in 16 T20Is. ALSO READ: Kagiso Rabada shines for Kent on debut in Natwest T20 blast

The CSA Awards Judging Panel will comprise Aslam Khota (convener), Neil Manthorp, Victor Mpitsang, HD Ackerman, Mark Boucher and Andrew Samson. Commenting on the award Khota told cricbuzz.com, “As always, these awards are tough to judge due to the stiff nature of the competition. Our world-class senior players are well established and there is an encouraging number of international newcomers making their mark as well.” ALSO READ: Kagiso Rabada breaks into Top 10 of ICC ODI bowling rankings; Australia retain No. 1 position in team rankings

The top 10 ICC ODI bowling rankings were declared and bowlers who performed in Tri-Nation Series 2016 attained career-best ODI rankings. Meanwhile, here are the other nominations:

Recently, Rabada entered the ODI rankings for first time and he gained the rank No. 7 along with teammate Dale Steyn, after he finished the Tri-Nations tournament with 7 wickets. 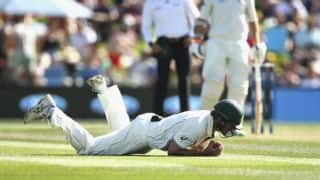