Veterans Jacques Kallis and Graeme Smith set South Africa on the way to a big total before two of the team's younger players pressed home the advantage in the second one-day international against Australia at St George's Park on Sunday. Veterans Jacques Kallis and Graeme Smith set South Africa on the way to a big total before two of the team’s younger players pressed home the advantage in the second one-day international against Australia at St George’s Park on Sunday.

South Africa, needing a win to square the three-match series, scored 303 for six in their 50 overs.

Kallis (76) and Smith (57) put on 142 off 154 balls for the second wicket after captain Hashim Amla was out to the first ball of the innings.

But the two senior players were out within five balls of each other and the innings lost momentum before David Miller (59) and JP Duminy (56) came together in a fifth wicket stand of 107 off 92 balls.

Australia suffered a blow when all-rounder Shane Watson had to leave the field after suffering what appeared to be a recurrence of the hip injury which kept him out of his team’s previous two matches on the tour.

Watson pulled up after bowling five balls of his fourth over. Depending on the severity of the injury it could prevent Watson from filling his normal role as an opening batsman because under new international regulations batsmen are not allowed to bat with a runner.

Kallis was in sublime touch as he dominated the early part of his stand with Smith, who had the opportunity to play himself into form after a poor start to the season. Kallis hit seven fours and a six in his 88-ball innings.

Smith struck the ball cleanly once he had played himself in and unusually hit most of his six boundaries on the off side.

The left-handed Miller played some crunching shots as he hurried to 59 off 51 balls with six fours and a six, while fellow left-hander Duminy was content to play a supporting role until he went on the attack in the closing overs. (AFP) 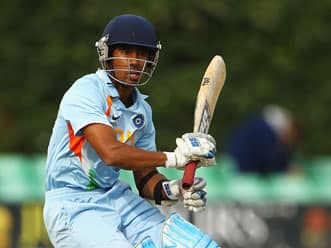