Kamran s feat came for Water and Power Development Authority (WAPDA) against Habib Bank Limited (HBL) at Niaz Stadum, Hyderabad. His knock consisted 27 boundaries and 4 sixes. His captain Salman Butt scored a breezy 59. Kamran reached the milestone off the 147th ball and was dismissed stumped the next ball.

WAPDA completed the 318-run chase in the 46th over. Kamran became only the second player with a List A double-hundred while chasing, after Travis Head (202).

Kamran has been in rich form. He was the top scorer in the National T20 tournament, scoring 432 runs in 8 innings. He also smashed Pakistan s highest T20 score of 150 in the tournament. The 35-year-old is banging on the selector s doors. 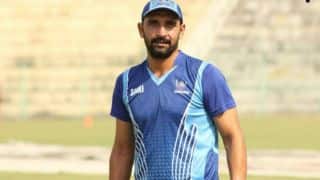