Kamran Akmal set to make comeback during series against Bangladesh

Kamran Akmal set to make comeback during series against Bangladesh

Pakistan's troubled wicketkeeper Kamran Akmal could finally make a comeback to the national team for the ODI and Twenty20 match against Bangladesh here later this month. 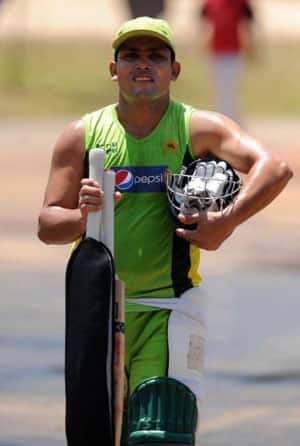 Pakistan’s troubled wicketkeeper Kamran Akmal could finally make a comeback to the national team for the ODI and Twenty20 match against Bangladesh here later this month.

Sources in the Pakistan Cricket Board told that Kamran, who has been out of favour since the 2011 World Cup, was only allowed to train with the Pakistan team at the National Cricket Academy last week after the board gave clearance.

“The Chairman of the Board, Zaka Ashraf has finally cleared Kamran to be considered for national selection that is why he is now training with the Pakistani players at the NCA,” a source said.

The 30-year-old — who has played 53 Tests, 137 one-day internationals and 38 Twenty20 internationals — has not been cleared by the board to be considered for selection to the national team since after the World Cup.

While he was dropped after the World Cup because of poor form, the PCB also had suspicions about his integrity after the spot-fixing scandal saw three Pakistani players, Salman Butt, Muhammad Asif and Muhammad Aamir first banned and then jailed for their role in it.

“Kamran has now also been cleared on the integrity form and given that he has regularly been playing domestic cricket and performing pretty consistently, he is now in line to be considered for the one ODI and one Twenty20 against Bangladesh later this month in Lahore,” another source confirmed.

The source said the move to get Kamran cleared and bring him back to the Pakistan team had begun when Pakistan were playing the one-day series against England in the UAE.

“Even former coach,Mohsin Khan, in a meeting with the PCB Chairman and captain Misbah-ul-Haq, had pleaded that the national team still could make lot of use of the experience and skills of Kamran Akmal,” the source said.

Kamran recently also played in the Bangladesh Premier League and performed well for the Sylhet team also captaining them in the last few matches.

Interestingly, Pakistan’s former captain and senior batsman Mohammad Yousuf has also started training at the NCA but chief selector Iqbal Qasim made it clear to the media in Karachi that while there was no issue with Yousuf training but he had to perform at the domestic level.

“It is good to hear that Yousuf is training again as there is no doubt about his quality as a player and his services to the national team are well known but if he wants to be considered for national selection once again he has to prove his form and fitness once again,” Qasim said.

The chief selector also said that the same rule applied on Akmal. (PTI)