The fourth ODI, which will be a deciding one, will be held at University Oval in Dunedin on March 7.

New Zealand needed 15 to win in 6 balls. Kane Williamson was looking to go all out. Chris Woakes read his intentions well, and got the better of him on ball one. Williamson, however, got a couple on the next delivery. On the third ball, Williamson smacked a slower delivery for six. The equation was 7 from 3. The next delivery was bowler slower as well. Williamson smashed it to the mid-wicket region, for two more. The last two balls were a full toss followed by a yorker. As a dejected Williamson slumped, for a pumped-up Woakes had ensured a 4-run victory for England.

Excellent spells from Moeen Ali (3 for 36) and Adil Rashid (2 for 34) and a freakish run out saw England cut New Zealand short at Westpac Stadium, Wellington. England have now taken a 2-1 lead in the five-match ODI series. Williamson’s lone hand of 112 not out off 143 balls found no support at the other end barring Colin Munro and Mitchell Santner.

New Zealand appeared to have the game in their hands at 80 for 1 in the 18th over before Moeen and Rashid turned the match with 5 for 23 between them in a 41-ball burst. Ali finished with 3 for 36 and Rashid took 2 for 34.

They were assisted by a stunning catch from Ben Stokes diving to his left to remove Colin Munro (49) to trigger the New Zealand slump from a 80 for 1 to 103 for 6. Williamson, who had missed the 2nd ODI due to injury, now scored his 11th ODI century and revived the New Zealand innings after the early dismissal of Martin Guptill (3). Williamson shared a 68-run stand with Munro; and once Moeen and Rashid had run through the middle order, he got another stand with Santner.

Earlier, tight bowling by Colin de Grandhomme saw New Zealand restrict England to 234. On a wicket that did not appear to hold many demons, de Grandhomme finished with 1 for 24 off 10 overs with his medium pace. Most England batsmen reached double figures but were unable to dominate. Captain Eoin Morgan top-scored with 48 while Jos Buttler and Stokes played a few shots. Ish Sodhi, the most successful of the New Zealand bowlers with 3 for 53.

The fourth ODI, a potential decider, will be held at University Oval in Dunedin on March 7.

Player of the Match: Moeen Ali 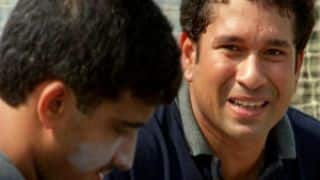