The KIwi batsmen stated that batting got easier after the first hour of the day's play.

New Zealand batsman Kane Williamson credited his team’s fantastic turnaround on the opening day of the first Test against India to the pitch, saying that it eased out considerably after a “tough” opening session.

The Kiwis recovered from 54 for three at lunch to be 329 for four at stumps and Williamson, who smashed a 113-run knock, said the pitch helped his team’s cause from the second session onwards.

“Naturally we wanted to win the toss which never ever seems to happen but it was tough initially which you expect with the new ball. Certainly it got pretty easy to bat on after lunch and going into the last session, so it’s nice to be in the position we are in going in to tonight,” he said at the end of day’s play.

“At some stage or the other, the Indian bowlers were all more threatening than others. Zaheer [Khan] was very good, then [Mohammed] Shami would come in with a very good spell and when the pitch got very good to bat on, Ishant [Sharma] would hit the bat hard. It’s hard to point one out but at certain times in their spells, they were all very threatening and something that we had to weather a little bit,” he added.

Williamson was very effusive in his praise for skipper Brendon McCullum, who was unbeaten at 143. McCullum shrugged off some patchy form to score his eighth Test hundred and put on 221 runs for the fourth wicket with Williamson after the team was reduced to 30 for three in the morning session.

“Brendon was the front-runner in this partnership and he batted outstandingly. He is hitting the ball really well in the nets and it is great to see him convert that into a performance. He is the captain and the way he has led the team has been fantastic.

“You look at his runs but he offers so much in other areas. It’s great that he is able to put a performance on today but that’s something that is a little bit of an icing for him after great performances in the One Day Internationals (ODIs) as well through his captaincy,” said the centurion.

When pointed out that they nearly achieved the three-figure mark in equal time, Williamson replied, “I saw him raise the bat before me, so that’s how I was judging it.

He batted fantastically. I think even what was more impressive was his 40-odd runs after his hundred which was very refreshing and great to see. It was a good lesson for all of us. He was ruthless.”

Even so, it is hard to neglect the form Williamson has been in recently. He scored five consecutive half-centuries in the five-match ODI series against India, and finally got to a hundred here.

“It is always nice to get a hundred but relief wouldn’t be the feeling. It’s been nice contributing to team wins previously, whether it is a hundred or not. It’s great, I wanted to keep batting. It’s not a hundred and done, so it’s a shame not to be out there with Brendon at stumps,” he said.

“It’s nice to be going out there and keep on batting and contributing to the side. But still there are always things you want to be working on and improving on, so you don’t look too far ahead and label things like best form. There is still a big job to do, maybe with the ball or in the second innings again,” he said.

New Zealand will feel confident with the way things shaped up for them on the first day of the series, and with the pitch easing out, they will be looking at a tall-score to put the out-of-form Indian batting under pressure.

“It’s tricky to put a number on the score we want on this pitch. In some ways, your score will reflect how well you bowl with the new ball.

“We’d like to keep batting and score as many as we can to put us in a very good position. And then if we can make some inroads with the new ball, then that will obviously make the score a little bit better,” Williamson signed off. 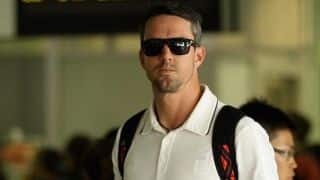