Currently, New Zealand are 92 for the loss of two wickets in 11 overs against England in 1st semi-final of T20 World Cup 2016.

New Zealand skipper and opener Kane Williamson was dismissed for a healthy 32 by spinner Moeen Ali, after being caught and bowled, against former champions England in the 1st semi-final on the ongoing ICC World T20 2016 at the Ferozshah Kotla Stadium in Delhi on Wednesday. Almost a full length, as Williamson sent for a slog sweep, but couldn;t connect it properly, as the ball took a thick top edge, and poped high in the air, while Moeen rushed into the mid off to take the catch. Currently, New Zealand are 92 for the loss of two wickets in 11 overs, with Colin Munro on 38, and Corey Anderson coming in. LIVE CRICKET SCORECARD: England vs New Zealand , Live Score, 1st Semi-Final match, ICC T20 World Cup 2016 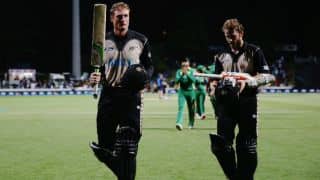