The decision of whether Williamson would play on Tuesday would be taken ahead of the match against England.

On Sunday, Jos Buttler confirmed Eoin Morgan s availability in the remainder of the T20I Trans-Tasman Series. Morgan, who suffered groin injury, was omitted from the clash against Australia on Saturday. Buttler was named the stand-in captain in Morgan s absence. New Zealand, too, might have to do away with their regular skipper for the tie against England. Kane Williamson on Monday was struggling with a back injury during the training session.

The decision of whether Williamson would play on Tuesday would be taken ahead of the match. In the absence of Williamson, Tim Southee would lead the side. Southee captained New Zealand during the first T20I against Pakistan last month. Henry Nicholls has also been called as cover.

Williamson gave an update about his injury to the reporters ahead of the clash, I am looking forward to taking a full part in training and hoping I should be fit for tomorrow night but Henry is in as cover. I’ve got a bit of a back niggle and hopefully it’s settled by tomorrow., as quoted by cricbuzz.

As for New Zealand s campaign in the series, Williamson added, It’s hard when you’ve got three teams and they are all trying to play cricket at the same time. Obviously England and Australia have played two in a row which means we didn’t have a game to play. It’s the nature of a tri-series. We certainly want to get on the board in this tri-series and it becomes very important that we play our best cricket tomorrow night. 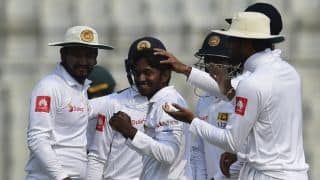