It was exactly a year back when New Zealand had toured India for a full series, and were completely outplayed by the smart Indians.

It was exactly a year ago when New Zealand had toured India, and were completely outplayed by the in-form Indians. At the same time of the year, New Zealand are back again, as this time they believe they are stronger and aim to put up a dominating performance against the hosts. However, New Zealand skipper Kane Williamson is wary of the recent performances of the home team, especially against Australia a few weeks back. He has warned that while playing at home, India are the strongest side in the world, and New Zealand need to play smart and competitive cricket to challenge them. New Zealand go head to head against India on Sunday in the first of the three-match ODI series at the Wankhede Stadium in Mumbai. FULL CRICKET SCORECARD: India vs New Zealand 2017-18, 1st ODI at Mumbai

“India’s record is very good at home. They are a very hard team to beat. We know that, at home in particular, they are the strongest team in the world. There are no illusions that we need to come out and play our best cricket. We saw in the last series here that we were two all going into the decider which was a fairly good effort although we knew that perhaps we hadn’t played our best and it was a shame in that last game [in Visakhapatnam which the Kiwis lost to lose the rubber 2-3]. It will be nice to come out in this series and, do a little bit better,” said Williamson during the pre-match press-conference at Mumbai, as reported by the PTI.

“Of late, we have been putting some good performances on the board and we know coming here, it is a very tough challenge and we have to be aware of this. “People talk a lot about adjusting to the conditions in India, and that’s is really important not just when you come to India but the specific grounds you play at, they are always a little bit different. We did that fairly well last time we were here and it would nice to do that better [this time]. We still did not put out our best performance in that last series, which was a hard fought series but we still were striving for that performance that we knew we could put out and hopefully we can show that in this series,” he added. Rohit Sharma: India will rely on Kuldeep Yadav, Yuzvendra Chahal for middle overs against New Zealand

Interestingly, this would also be New Zealand’s first-ever ODI against India at this venue. Speaking on the issue, Williamson said, “Yes, we played a couple of games in the World Cup, against other opposition, but the guys have played IPL games here, it is a nice stadium and so it is nice to get the series underway here at the Wankhede.”

Williasmon also confirmed that Martin Guptill and Colin Munroe would be the openers on Sunday’s match, while Tom Latham has been pushed down to the middle-order following his century in the second warm-up tie against Board President’s XI while batting at the position. “The opening batters for tomorrow are Guptill and Munro, two good ball strikers. Munro and Guptill at the top are both exciting stroke makers and look to play their natural game which is I think is important. Tom Latham will bat in the middle order. He had some good time in the middle in the last couple of warm-up games and will obviously keep [wickets],” said Williamson. Boult a challenge for Indian batsmen, says Rohit Sharma

“Yes, we have got a relatively new middle order. They certainly deserve their position. These guys were here on the A tour and experienced these conditions for a while, coming into the series, which is always good,” he added.

Speaking on the warm-up ties they played ahead of the series, Williamson said, “Yes, they were a couple of good head outs for us after a bit of a break from international cricket, so it was nice to get back together and start acclimatising as best as we can. The guys got through some good work. We will put our foot forward coming into the first game and play our best cricket.”

He also spoke on the Wankhede track and termed it as a good cricketing surface. “Looks like a fairly good surface. I certainly will have another look at it tomorrow. Generally, wickets here at Wankhede are good surfaces and will expect something similar. Yeah, it is different. Sometimes, in our conditions where the ball moves off the seam, aggression is often seen as having slips and various catchers. Over here, at times, it may not be suited and it may be a bit more spin-friendly,” he concluded. 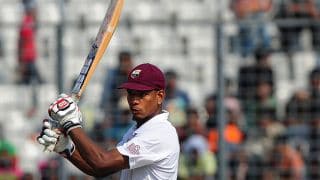