New Zealand skipper Kane Williamson on Saturday termed the performance of his batting department as "frustrating" vs India in the 5th ODI.

Visakhapatnam: Bruised and battered by India after being bundled out for a meagre 79 while chasing 270 in the series-deciding fifth and final ODI, New Zealand skipper Kane Williamson on Saturday termed the performance of his batting department as “frustrating”. Williamson said the Kiwi batsmen did not justify to lose eight wickets for just 16 runs. “That’s what’s so frustrating, because we failed as a batting unit. The spinners of the Indian side bowled very well but I don’t think it is justified to lose 8 wickets for 16 runs. We need to look at some of our plans. There was turn in the pitch in some other games too but we were able to handle it better then,” Williamson said after their massive 190-run defeat in the fifth and final ODI. FULL CRICKET SCORECARD: India vs New Zealand, 5th ODI at Visakhapatnam

“Unfortunately, sometimes the biggest, brightest lessons come from failures and defeats. I certainly hope to learn from here. It was extremely a good effort to take it to the fifth ODI but sitting here after all that, it’s frustrating. The better team certainly won today. We certainly weren’t good today. No excuses. India were just the better side. They were consistent throughout the series,” he added. Ranked ahead of India by one rung, world no. 3 New Zealand showed resilience to bounce back after a 0-3 whitewash in the Test series as they had leveled the five-match ODI rubber 2-2 with a 19-run win in Ranchi.

“Yeah, it’s extremely disappointing. You know, after a tough Test series to bounce back and show the heart that was required, the fight that we needed to go 2-all against a very good Indian side, was a superb effort,” Williamson said. “They got above-par initially with the bat on a tough surface. There are certainly no excuses from our end, we were extremely poor with the bat today,” he said. FULL CRICKET UPDATES: India vs New Zealand, 5th ODI at Visakhapatnam

A win would have been made history for the Black Caps, who have never beaten India at home earlier in four contests. The Kiwi skipper said it’s all about regrouping after going back home when they host Pakistan for two Tests before a packed ODI calendar involving Australia, Bangladesh, South Africa and the Champions Trophy in June 2017.

“Yeah, it’s tough to say at the moment. We’re going to go back home and play in very different conditions. At the moment we want to reflect on our performance here. We were somewhat disappointing, barring a couple of games. We want to be showing steps of improvement everyday,” Williamson said. Amit Mishra: Anil Kumble s mental support is the biggest thing for me

He further credited India for setting up a challenging 270-run target on a tough batting surface at the Dr YSR ACA-VDCA Cricket Stadium. “Ideally we would’ve liked to have restricted them to much less. The way the put together partnerships on a pitch that was slow was a very good effort. They kept going at 5 runs an over on this pitch, they certainly deserved to win today. They were fantastic,” he said.

Opener Rohit Sharma returned among runs with a fine 70, while an ever-consistent Virat Kohli slammed 65 before Mahendra Singh Dhoni (41), Kedar Jadhav (39 not out) contributed to take India to 269 for six after electing to bat. “They had a good score on the board on that surface, but we knew that if we could get partnerships together, who knows, we could’ve done better,” Williamson said.

Despite the losses, Williamson pointed out at the positives they would take home from tour. “He [Mitchell Santner] has been outstanding. Certainly a highlight from our tour. A young cricketer, who is newish to our side. Although conditions were favourable to spinners here there are a lot of spinners who come here and struggle.”

“I guess it’s because of the pace of the wicket against extremely good players of spin. Mitch Santner has performed day in and day out. He’s a great asset to have. Not to mention his batting and his fielding as well. Look forward to seeing his progression in the future,’ he said. “I think Tom Latham was outstanding. We need to take those little good bits and look at someone like Virat Kohli.”

Ross Taylor has had a forgetful outing not only with his bat but with his fielding as well but Williamson came out in defence of the senior batsman. “I think if you look at any winning performance, there are one or two significant performances. If you look at the India side, there’s Virat Kohli. I think pretty much every game he made significant contributions for his side. Sometimes the conditions weren’t ideal to play on but someone has to step up and whoever that person is, we need a lot more,” he said.

Williamson was New Zealand’s top-scorer of the day with 27 before being dismissed by an expansive inside-out shot that triggered the collapse. “It is a tough one. You feel like it’s a good option to play that shot and if you get out, you question it. Here I am questioning it,” he said. “For Ross Taylor and I to take it deeper, it would’ve been a lot better for our cause. Obviously, it wasn’t happening for us today. We both got dismissed when we needed at least one of us to hang in there and take the game deep.”

He also praised Indian spinner Amit Mishra’s match-winning performance both in the decider and the series. “To get fifer for any bowler on any surface is a significant performance. He [Mishra] bowled very well today. I think it’s justified in him getting the man-of-the-match and the man-of-the-series. He has been very consistent. We were poor and India were very good,” Williamson signed off. 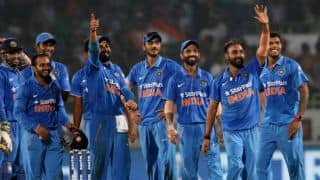 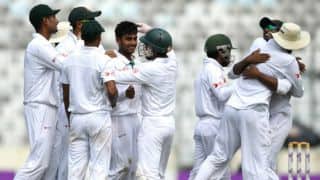