New Zealand managed to gain a 98-run lead against Pakistan at the end of the 89th over.

New Zealand batsmen Kane Williamson and Ross Taylor completed the 100-run stand for the third wicket during the post-lunch session of the third day of the third Test against Pakistan at Sharjah on Saturday. Williamson and Taylor were batting on scores of 176 and 45 respectively, with New Zealand reaching a score of 449 for the loss of two wickets at the end of 89 overs, leading Pakistan by 98 runs.

New Zealand had earlier finished on 388 for two at the end of the first session. While Williamson had brought up his eighth Test century during the early part of the first session, it was Brendon McCullum reaching his fourth career double-century on the 186th delivery that he faced that was the highlight of the day. It was McCullum’s third double-ton of the calendar year, as well as the fourth fastest of all time. The New Zealand skipper was eventually dismissed two deliveries after reaching the milestone off the bowling of Yasir Shah while attempting a sweep of a delivery that was pitched outside leg. 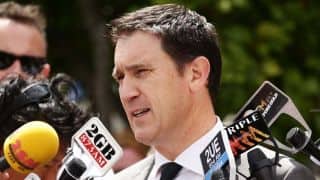