Kane Williamson and Ross Taylor steadied New Zealand's innings as they reached 95 for two at lunch.

Kane Williamson and Ross Taylor steadied New Zealand‘s innings as they reached 95 for two at lunch on the opening day of their third and final Test match against the West Indies at Kensington Oval in Barbados on Thursday. Williamson was batting on 40, while Taylor was on 34 not out as the two batsmen added 67  runs for the third wicket to take New Zealand to safety after Kemar Roach’s strikes early on.

Electing to bat after winning the toss, New Zealand started off on a cautious note but failed to get a strong opening stand. Roach first had Hamish Rutherford caught by West Indies veteran Shivnarine Chanderpaul at mid-on in the fourth over, and then struck again in the 10th over when he trapped Tom Latham in front of the wickets for 14.

Latham’s wicket put New Zealand in trouble as they were reduced to 28 for two after 10 overs, but Williamson and Taylor did well to steady the ship and take them into the second session of the opening day without any further damage.

The two batsmen batted well in the session, not giving the Caribbean bowlers any chance to make further inroads. Williamson, who slammed a fine century in the opening Test of the series picked up boundaries at regular intervals and the regular rotation of strike helped the tourists to keep the scoreboard ticking. 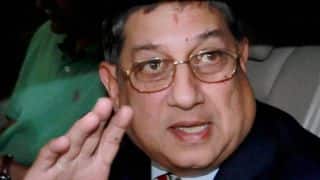 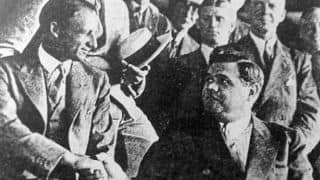