New Zealand are already 2-0 in the five-match series but Williamson is not completely happy.

Kane Williamson has called on his bowlers to be more accurate in the final overs as they look to take an unbeatable lead over Pakistan in the third ODI in Dunedin on Saturday. New Zealand are already 2-0 in the five-match series but Williamson is not completely happy, especially with the bowling to lower-order batsmen. Pakistan rocketed from 141 for seven in the 37th over to make 246 for nine in game two, repeating a pattern that has been all too common in recent seasons where New Zealand have let the score get away on them after a solid start.

“We learnt a few lessons from the last game,” Williamson said Friday.”They bat very deep, the Pakistani side, and that is a sign of a good team,” he added.”To see their lower order come out and put together a partnership that gave them a total which could have been a tough chase… it’s important that we learn from that.” Despite the big hitting, particularly by Hasan Ali and Shadab Khan who both made half centuries, New Zealand won the match in Nelson by eight wickets after the rain swept in. The hosts were set a revised target of 151 in 25 overs.

The first match in Wellington, which New Zealand won by 61 runs, was also affected by the weather and further rain is forecast for game three in Dunedin on Saturday. If a result is achieved, a win would not only give them New Zealand the series but they would also equal their longest streak across all formats of 10 wins. New Zealand have Colin de Grandhomme back in their squad after the allrounder returned from bereavement leave, but Williamson said they would wait to view the pitch Saturday morning before settling on their playing XI.

Fakhar Zaman, who scored an unbeaten 82 in the opening game, is expected to return to the Pakistan side after missing game two because of a thigh injury. 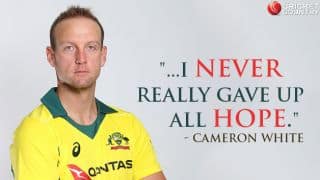 Cameron White: I was surprised to receive selector's call 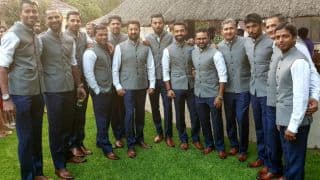