Kane Williamson played a brilliant knock of 42, as New Zealand finished on 145 for the loss of six wickets against Bangladesh in ICC WT20.

New Zealand skipper Kane Williamson played a brilliant knock of 42, as New Zealand finished on a healthy total of 145 for the loss of six wickets against Bangladesh, in Super 10 Group 1, Match 28 of the ongoing ICC World T20 2016 at the historic Eden Gardens Stadium in Kolkata on Saturday. Mustafizur Rahman, the fast bowler, claimed five wicket for 22, the first Bangladeshi to do so. Earlier, New Zealand skipper Kane Williamson won the toss and elected to bat first, as he made a couple of changes in the form of Nathan McCullum and Henry Nicholls, who came in for Adam Milne and Martin Guptill. FULL CRICKET SCORECARD: New Zealand vs Bangladesh, 28th T20 Match, Super 10 Group 2

New Zealand began their innings on a moderate note, as with 25 runs on the board, they lost their opening wicket in the form of Henry Nicholls, who fell for mere seven to fast-bowler Mustafizur, after being bowled by him in the fourth over. It was followed by a healthy, but brief 32-run stand for the second wicket between Williamson and Colin Munro, before the skipper fell for a brilliant 42 to Mustafizur, in a similar fashion in the ninth over. FULL CRICKET UPDATES: New Zealand vs Bangladesh, 28th T20 Match, Super 10 Group 2

However, it was the pair of Munroe and Ross Taylor, that set up the biggest partnership of the innings, of 42 runs for the third wicket, before Munroe fell for a healthy 35 to Al-Amin Hossain, after being bowled by him as well in the 15th over, at the score of 99. While just a run later, it was Corey Anderson, who too followed his way back to the pavilion, after a brief stay, as it was the Bangladesh skipper Mortaza, this time, who bowled him up for an unfortunate duck, in the very next over.

It was followed by a 22-runs stand between Taylor and Grant Elliott, before Elliott was dismissed for mere nine by Mustafizur, after being caught by Shuvagata Hom in the 18th over. Also, the very next over, at the score of 127, it was Taylor, who was dismissed for 28 by Al-Amin Hossain, after being caught by Mohammad Mithun. The final over saw Mitchell Santner being bowled by Mustafizur for mere three, followed by Nathan McCullum for an unfortunate duck off the very next ball in a similar fashion, as he became the first Bangladeshi to claim a five-wicket haul in Twenty20 Internationals (T20Is), while New Zealand became the first full ICC member side to lose six wickets via bowled, as they finished the innings on 145 for the loss of eight. 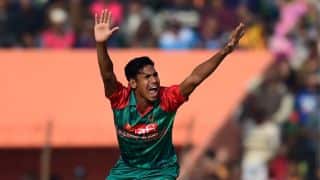