Mumbai: A fit again South African pacer Dale Steyn today said that New Zealand’s decision to play three spinners against India in the World Twenty20 opener paid off as the Kiwis posted a comfortable 47-run win over the hosts. Chasing a mere 127 runs for victory, favourites India were bundled out for 79 in 18.1 overs on a turning track at Nagpur last night with the Kiwi spinners sharing as many as nine wickets among them. “I guess New Zealand thinking was correct. Playing with three spinners paid off. We would probably go with spin, I don’t know. But as a seamer I have to back myself. Bowl fast cutters. It is really difficult to hit out when the ball is coming at 140-145, its gripping and stopping,” Steyn told reporters on the sidelines of his team’s practice session at the Brabourne stadium here today.

Steyn, who had suffered a shoulder injury, said he was now fully fit and things were coming up nicely. “I am fit and fine. Wasn’t a lot of injuries, just two injuries. The first one was a groin, just probably a week-10 days, but I made a rush, trying to get into the Test match (against India) in Bangalore, which put me back another four weeks, which put me out of the series. “I had a really bad shoulder and unfortunately I could not come out too quickly from that. When you have a broken shoulder, you have to set it for 8-10 weeks. It is not that I was injured the entire time, I had a really bad shoulder. Now I am feeling strong, fine. It’s nice to be back in India. Played a couple of games against Australia, two warm up games. Its coming up nicely,” Steyn said. “Our management is good with me, I have never really (being) pushed to do anything more than what my body requires.

I have played a handful of ODIs. Just over 110, whereas someone like Brett Lee played close to 300 ODIs at this stage of his career. I have been handled well, managed well, I also made good decisions, sometimes it is against me, pulling out of tournaments, series. I have been bowling with same speed all my career. I am still landing the bowl at same place, I guess it is working,” he added.32-year-old pacer said age was just a number and cited the example of Mumbai spinner Praveen Tambe, now 45. 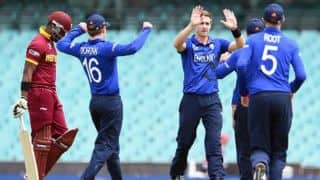