Indian cricket legend Kapil Dev has been honoured with a Lifetime Achievement award at a ceremony in the House of Lords. The award, constituted by the Indo-European Business Forum (IEBF), was presented to the former India World Cup-winning captain yesterday evening for his contribution to the sport and for his work in the field of upliftment of poor and destitute communities through the Khushii society.

“I am very proud to be Indian. Today India is ready to do business with anybody in the world,” Dev said in his acceptance speech. “I used to hate England because they ruled my country but I am happy they gave us the game of cricket, which they can’t play very well, and the English language, which I can’t speak very well,” he added on a lighter note.

Arguably the greatest pacer bowler and allrounder India has produced, Dev led the country to its maiden World Cup triumph in 1983, beating the then formidable West Indies in the title clash at Lord’s. With 434 scalps, the 55-year-old Dev held the record for most number of wickets in Tests for some years before being eclipsed by former West Indies captain Courtney Walsh in 2000. 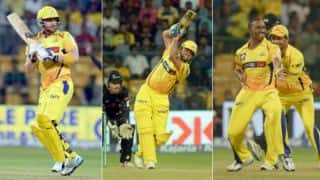 Barbados Tridents vs Cape Cobras: Both teams will look for first point in CLT20 2014