The controversial recommendation of boxer Jai Bhagwan and squash player Anaka Alankamony for the prestigious Arjuna Awards stands after the Kapil Dev-led selection committee met again and decided not to make any changes in the original 15-athlete list.

Jiji Thomson, Sports Authority of India (SAI) director general who was part of the Awards committee, said they discussed seven athletes in the review meeting but it was unanimously agreed that no changes were needed in the earlier shortlist. The sports ministry is unlikely to turn down the panel recommendations before approving the names for the ceremony to be held later in the month.

“The committee decided against adding any name for the Awards. It was an hour long meeting and we all agreed that the 15 names shortlisted earlier were deserving for the honour. Having said that, there will always be a case when a deserving candidate misses out and his or her turn comes later,” Thomson told PTI.

Choosing Bhagwan and ignoring the 2010 CWG gold medallist boxer Manoj Kumar had led to a controversy and forced the committee to reconsider its decision. 20-year-old squash player Alankamony’s inclusion in the list had also raised eyebrows while Hockey India secretary general Narinder Batra went to the extent of slamming the panel for overlooking seven of its players.

Thomson said Kumar’s application was not considered earlier owing to a case of mistaken identity and today the committee discussed him. However, the committee thought Bhagwan was also a deserving candidate and therefore stuck to its stance, the SAI DG added. Kumar, with 32 points, had maximum points amongst the boxers who applied for the honour and two more than Delhi CWG bronze medallist Bhagwan. 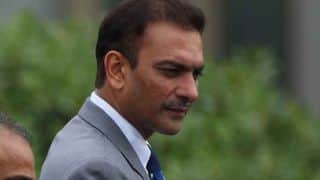