The date February 11, 1981 is a special one for Indian fans. The day will be etched in the annals of Indian cricket history as one of its finest moments and the credit for that goes to India’s premier all-rounder Kapil Dev.

The third Test of India’s 1980-81 tour to Australia will be remembered for one of the most infamous controversies, when Indian captain Sunil Gavaskar, furious with contentious umpiring almost forfeited the Test. Gavaskar, who was going through a lean patch, was given out leg before for 70 to a Dennis Lillee delivery, despite getting an inside edge. Throughout the series, Indians had been the victim of bad umpiring. Disappointed, Gavaskar was on his way back, when an abusive comment by Lillee, made him come back and ask his opening partner Chetan Chauhan to go back to the pavilion. Chauhan overheard the umpire saying, “If you are walking out, you are taking a chance of forfeiting the game.”

The tension was diffused when team manager Shahid Durani who received Gavaskar at the gate of the playing area and asked Chauhan to continue, with Dilip Vengsarkar, the number three batsman, joining him.

All of this was overshadowed by Kapil’s feat. India lost the first Test at Sydney, and Sandeep Patil’s blitzkrieg at Adelaide helped India draw the Test, and they had to win this to avoid a series defeat.

Australia were chasing 143 to win, and the wicket had deteriorated completely by then. Indians were without two of their four specialist bowlers – Shivlal Yadav had broken his toe on the first and Kapil was nursing a thigh-injury. Karshan Gharvi gave India an encouraging start, having John Dyson caught behind with 11 on the board. He then went on to get the big one; Greg Chappell was bowled around his legs first ball. Dilip Doshi, the left-arm spinner, had Graeme Wood splendidly stumped by Syed Kirmani.

On the last day, Australia needed a further 119 with seven wickets in hand. Kapil took pain-killing injections through the night and on the fifth morning; he was ready to fire and was moving the ball both ways.

Kapil got the ball to swing-in sharply and the pitch did the rest, the ball kept low and there was nothing Bruce Yardley could do, he was bowled, with Australia faltering to 50 for five. Five runs later, Kapil struck again, this time it was the big wicket of Allan Border, who tried to flick down to the fine-leg but managed a faint nick on its way to Kirmani.

Rod Marsh tried to play a similar shot like Border and was bowled round his legs. Marsh came too far across and the ball once again kept low. Lillee, who had a tiff with Gavaskar, fell next. He tried an ambitious heave, only to be cleaned up by Kapil. At 79, Pascoe was run out and four runs later, the historic moment arrived when Jim Higgs was trapped plumb in front of the wicket.

Kapil bowed 16.4 overs, gave away 28 runs and picked up five wickets as Australia were bowled out for 83, giving India a series levelling victory.

During the Boxing Day Test between India and Australia in 2014, Gavaskar “regretted” his decision of asking Chauhan to walk-off with him and at the same time said that the Indian team was charged up and to them the 143 looked as if they had a lot to defend. 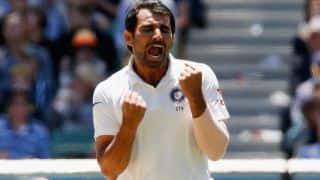