Karan Thakur took a ten-for for Railways A against Baroda A, but couldn't prevent a defeat.

So you picked up 10 wickets in an innings and your team lost. What would you do?

The youngster brought the usually staid Col CK Nayudu Trophy tournament for the under-25 teams of Ranji Trophy states alive on Saturday by doing an Anil Kumble. He took 10 wickets in one innings against Baroda at the Reliance Stadium in Vadodara.

However, his joy of celebrating the rare feat was limited as his team lost to the hosts by 10 wickets on Day Two of the four-day match.

Thakur’s achievement saw him become the first bowler in the history of the tournament. His first innings figures read: 28.5-5-77-10 with an economy rate of 2.67. In the second innings, however, he bowled 2.5 overs giving 12 runs before the hosts romped home.

So, the question remains. Will he celebrate? “There have been no celebrations so far. We lost the match and it is disappointing,” he says from Vadodara. “However, I will have dinner with friends later in the night.”

The 23-year-old adds, “I have taken seven wickets earlier and have many five-fors, but 10 wickets is a different feeling all together. It is a feeling which has not sunk in yet.”

So when did he come to know that he stands a chance to get all-Ten. “I had five wickets on Day One. The ball was moving well. I thought I would go for a couple more. But once I got the other two, I thought I will go for all of them. My teammates started backing me. Later, it was all luck and God’s wish.”

Kumble was the only Indian to achieve the all-Ten against Pakistan in 1999 at Feroz Shah Kotla. Did he ever think about it when he was on nine? “Never. I was not thinking on those lines. I did not want to put pressure on myself,” he says.

Karan, who had a stint with his idol Glenn McGrath earlier this year at the MRF Pace Academy, reveals he learnt a lot from the Australian legend.

“He is my idol. I had a great stint with him where I learnt a lot. He is a very cool guy and guided me really well. He liked my action but asked me to stick to bowling proper line and length,” said the youngster, who works as a pointsman in the Indian Railways.

Meanwhile, Railways coach S Srinivasan says Thakur is a good prospect. “Had I been a selector I would have included him in the Railways Ranji team. He has good height and moves the ball well at 130-140kph. He is definitely a prospect,” he says.

Started playing cricket at the age of 17

Plays for the famous Sonnet Cricket Club in New Delhi 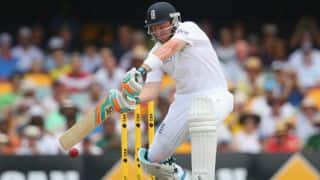