When Ireland face England at Lord's in July, the 11 members of the visiting team will not be the only Irishmen taking part in their first Test match at the "Home of Cricket".

When Ireland face England at Lord’s in July, the 11 members of the visiting team will not be the only Irishmen taking part in their first Test match at the “Home of Cricket”.

The new Lord’s head groundsman Karl McDermott, originally from Dublin, will also have a key role.

But McDermott is adamant that neither loyalty to his home country nor possible pressure from the England hierarchy to prepare a pitch in their favour will influence him.

“Would I take an Ireland win or a good pitch? I’d take a good pitch, no doubt,” he told reporters at Lord’s on Tuesday.

“Irrespective of the result, the pitch is the main focus and the main goal for me.

“There’s no hesitation there,” he insisted before adding, with a smile: “I’d take a high-scoring Ireland win!”

A busy first season in charge will see McDermott preparing pitches for the men’s World Cup, including the July 14 final, and for a subsequent Ashes Test in August.

McDermott, previously at southern county Hampshire since 2009 before being appointed last year to his post at Lord’s, the London headquarters of Marylebone Cricket Club (MCC), said he did not expect to be put under pressure to “doctor” the pitch.

“Speaking from Hampshire, we never had any requests from England,” he said. “They always asked for the best cricket pitch and I expect the same here.

“Our aim is to produce the best pitch possible. You want a bit of pace, a bit of bounce and some spin at the end.”

Preparing a playing surface is a fine art and a groundsman can be a central figure in the outcome of a match, with pitches influencing team selection and tactics.

For all the allure of the World Cup and the Ashes, the visit of Ireland, whose men’s team played their first Test match just last year, will be a highlight for McDermott.

“The World Cup and the Ashes is brilliant but having Ireland here… it’s going to be a brilliant experience,” he said. “Obviously I have a lot of friends and people coming over and I’m getting texts saying ‘the masterplan is in place’ and things like that.”

Cricket was still very much a niche sport in Ireland when McDermott first became involved as a teenager.

“My maths teacher at school was the groundsman at my local cricket club. I didn’t play cricket, I knew nothing about it. I was 14 and he was looking for a non-cricketer to give him a hand in the summer,” he recalled.

“That was Mount Temple, in Clontarf (north Dublin), and then Clontarf Cricket Club.

“I just did it for the summer, for a couple of hours a week, five Irish pounds a week at the time. And I sort of kept it up really, summer after summer, and the opportunity arose to step into his shoes when he’d had enough.

“Clontarf held C&G and Natwest Trophy matches, things like that, so we always had one (English) county over here a season. That gave me a bug for professional groundsmanship.

“We had a World Cup game in ’99, West Indies played Bangladesh, so that probably to date was my favourite moment of my career.

“It took a few years but I went over to Worcester in 2007 and that’s where it started really.”

McDermott has succeeded the long-serving Mick Hunt, who retired last year after 49 years on the Lord’s groundstaff.

“They are certainly big shoes to fill. It’s fair to say it is the dream job. It’s exciting, I wouldn’t say daunting,” said McDermott, a former hockey player who once considered becoming a PE teacher.

A clatter of wickets on the first morning of the match often leads to awkward questions for a groundsman even when the pitch is blameless.

“It never looks clever but it could be for a different reason,” said McDermott, whose first game as Lord’s groundsman will be a County Championship match between Middlesex and Lancashire starting on April 11.

“But as long as you trust the work you’ve put in you’ll be fine. There’ll be butterflies on April 11 for my first game.

“I haven’t had too many shockers in my time, so touch wood that continues.” 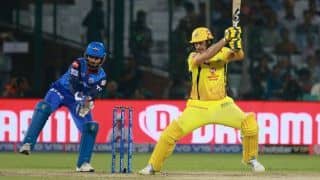