Railways leg-spinner Karn Sharma is ecstatic after his maiden call-up in the Indian Test team and is looking forward towards a chance to meet the legendary leg-spinner Shane Warne during the upcoming Test series against Australia Down Under.

“It is any leg-spinner’s dream to meet the greatest of them all — Shane Warne. Obviously, I am eager to meet Warne if I get a chance during the upcoming tour of Australia. It will be a nice experience if I can get some tips on the subtle nuances of leg-spin bowling from him,” 27-year-old Karn told PTI from Nagpur, where he scored 32 and picked up three wickets, in a Vijay Hazare Trophy match against Madhya Pradesh.

Karn missed out on playing against Warne as he got his maiden Indian Premier League (IPL) contract after Warne had quit playing in the cash-rich league. Karn, who made his senior India debut against England in a one-off T20 in Birmingham is happy that he is now in contention for a place in longer version.

“It’s a proud moment for me that I have been selected in the Test team. Every cricketer aspires to wear the whites for his country. I would give my hundred per cent if I get a chance to play in the Test matches,” said Karn, who has 66 wickets from 34 first-class matches for Railways.

Asked if he has got any advice from skipper Mahendra Singh Dhoni during his maiden stint with the Indian team in England, Karn said, “Dhoni bhai had been very encouraging from the start. He told me on my debut that I have to focus on keeping things simple. The key to doing well at the highest level is getting the basics right on a consistent basis. That has been his advice and I have tried to followed that.”

Karn has had the experience of playing in Australia for India A in a quadrangular tournament, where he played in four matches. “Obviously, having played for India A in Australia will be of huge help. Atleast I have some idea about the conditions over there. I am expecting that the pitches there will help my style of wrist spin bowling.”

A powerful left-hander, Karn has scored over 1,000 (1,087) runs in First-Class cricket with a century and seven half-centuries and is also keen on doing well with the willow.

“I am ready to bat at any position where the team management would want me to bat. I enjoy my batting would be happy to contribute to the team’s cause,” said the lad from Meerut. 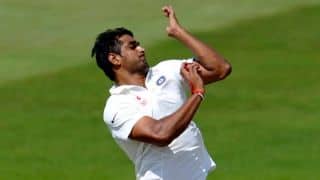