Leggie Karn Sharma celebrated his India call-up by guiding Railways to a five-wicket win over Madhya Pradesh in a Central Zone match of the Vijay Hazare one-day tournament. Sharma, who has been selected for India’s remaining two ODIs against Sri Lanka and the tour of Australia, took three wickets before hitting a 32-run cameo in his team’s victory.

Railways raced past Madhya Pradesh’s 241 for five with 14 balls to spare. It was Railways’ third win in as many games while Madhya Pradesh suffered their second loss in a row.

Wicketkeeper-batsman Naman Ojha, who finds himself in the squad for the first Test against Australia, struck a solid 61 off 86 balls in a losing cause. Ojha and his opening partner Jalaj Saxena shared a 118-run stand but the other batsmen could not capitalise on their good start.

Opener Asad Pathan made Railways’ chase much easier by hammering 63 off 36 balls. 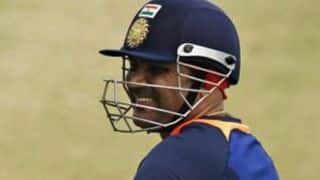