At one point of time Vinay Kumar's Karnataka were 115 for two.

An inspired second spell by in-form Mumbai pacer Shardul Thakur triggered a batting collapse for defending champions Karnataka in the first semi-final of the Ranji Trophy 2014-15 at Bangalore. It was mainly because of Thakur’s four for 61, the hosts, Karnataka were all-out for 202 in their first innings. At one point of time Vinay Kumar’s Karnataka were 115 for two, but their last eight wickets added only 87 runs. Live Blog: Karnataka vs Mumbai

Earlier on Wednesday morning, Karnataka skipper, Vinay won an important toss and surprisingly decided to bat first on a green track. The decision immediately backfired as their in-form opener KL Rahul got out cheaply. Soon after Samarth R also got run-out. But after those two wickets Robin Uthappa and Pandey recused the team somewhat with a 81-run partnership for the third wicket. Uthappa played an aggressive innings and reached his half century, whereas Pandey played carefully.

But the match turned in favour of Mumbai’s way when Wilkin Mota broke the partnership. He took the wicket of Uthappa who was going well at that point. Floodgates were opened and the Mumbai pacers, especially Thakur made the full use of the situation. He got rid of Manish Pandey and Kunal Kapoor in quick successions. CM Gautam and Shreyas Gopal also failed to add significant contribution for their team in the important game.

Karun Nair was playing well at one end but noone stayed with him. Thanks’to Nari’s 49 not out, Karnataka managed to get past 200-run mark. For Mumbai except Thakur,  Mota got two wickets. B S Sandhu and Abhishek Nayar got one wicket each. 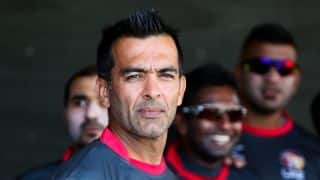