It was Ajinkya Rahane and Karun Nair who opened the batting for Rajasthan Royals against Kings XI Punjab in Indian Premier League (IPL) 2014. They are chasing a target of 180 runs. It was Rahane who started the boundary count for Rajasthan with a shot over long on region for a boundary. Lakshmipathy Balaji, the medium pacer opened the bowling for Punjab. It was Beuran Hendricks who bowled the second over for Punjab. Nair then was dismissed off Balaji’s bowling caught by George Bailey.

Earlier, despite losing wickets at regular intervals against Punjab‘s batsmen played with fearless courage during the early part of their innings. Rjasthan bowlers did make a fine comeback in the middle overs, but George Bailey and David Miller with their pyrotechnics in the end overs helped them to a score of 179 runs for the loss of four wickets on the board. 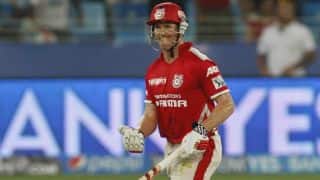 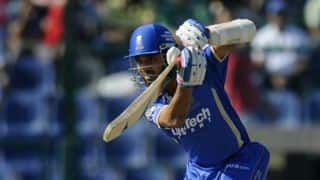