Sri Lanka's effort with the bat was headed by skipper Dinesh Chandimal.

Sri Lanka have beaten India by 5 wickets in the first Twenty20 International (T20I) at Pune. Sri Lanka were pushed hard by India even though the chase was a small one, but ultimately India simply had too little on the board to make a match out of it. India may have had only 101 to defend but the bowlers showed a lot of resolute right from the start. Ashish Nehra feasted on the green of the pitch to take two wickets early in the innings. He got Niroshan Dickwella in the very first over with the short ball outside off which the batsman tried to pull but got the top edge to mid on. Live Cricket Scorecard: India vs Sri Lanka 2015-16, 1st T20I at Pune

Jasprit Bumrah also bowled very well but had no wicket to show for it in his first spell. He got the ball to nip off the surface and deviate in the air too. He beat the batsmen’s edges and did not let them to score off him without risking their wicket. His first over was a spectacular maiden. Live Cricket Blog and Updates: India vs Sri Lanka 2015-16, 1st T20I at Pune

Nehra got his second wicket in his third over. Danushka Gunathilaka had been very uncertain at the crease akin to most batsmen in the day and did not last long. Even he fell attempting to play the pull shot but instead top edging it to the man at midwicket.

After that Sri Lanka dug in and battled some good bowling to build a good partnership. Skipper Dinesh Chandimal looked quite settled but Chamara kapugedra was evidently unsettled, yet he stuck around and soon found a way to score a few runs.

The partnership swelled to almost 40 runs and was threatening to snatch the game away from India without hassle. But, Ravichandran Ashwin made a breakthrough at a crucial stage by trapping Kapugedra in front with Sri Lanka’s score over 60. It was still a very tough ask for India to defend the score.

Chandimal was one of the rare batsmen who showed the skill to tackle the testing conditions. His footwork and timing held him in good stead. Unfortunately after he had just smashed a six over long off off Raina’s bowling, he suffered some cramp and a lengthy break ensued. The break did not do him any good. He was trapped in front next ball to fall for a crucial run-a-ball 35.

By that point, Sri Lanka were in sight of victory requiring less than 20 runs with six wickets in hand. India tried hard to push them to the edge but to no avail. Dasun Shanaka was the only wicket to fall from there to the point of Sri Lanka’s victory. The triumph was sealed by consecutive boundaries from the bat of Milinda Siriwardana. Sri Lanka got past the line with two overs and five wickets to spare.

Earlier, Sri Lanka’s debutants — Kasun Rajitha and Dasun Shanaka — preyed on India’s batsmen on the green wicket. Both bowlers had double-breakthrough starts to their respective international careers. Rajitha removed Rohit Sharma and Ajinkya Rahane in the very first over while Shanaka made an impact in the middle order by dismissing MS Dhoni and Suresh Raina.

No Indian batsmen showed the adaptability required to be productive on a pitch of this nature. Rajitha also dismissed Shikhar Dhawan later in his first spell to completely scupper India’s innings at the start.

Most batsmen failed miserably. Raina survived two dropped chances but still scored just 20 runs. India were in serious threat of crumbling before reaching three-figures, but Ashwin showed the application all other batsmen were reluctant to show. He scored an unbeaten 31 to take India one past 100.

Rishad D’Souza, a reporter with CricketCountry, gave up hopes of playing Test cricket after a poor gully-cricket career. He now reports on the sport. You can follow @RDcric on Twitter) 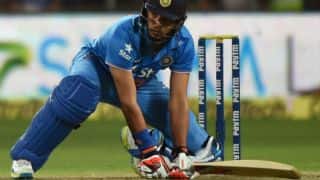