Kumar Sangakkara chipped in to make 28 with five boundaries.

Kaushal Silva led Sri Lanka to 221 for three at tea on the first day as they faced Northamptonshire on Thursday ahead of next week’s first Test against England at Lord’s. At the interval, on the opening day of this four-day fixture at Northampton, Silva was 84 not out and Lahiru Thirimanne, Sri Lanka’s captain for this match, unbeaten on 55 after being dropped first ball.

Northamptonshire, struggling at the foot of the First Division of the County Championship table with five defeats from six matches, did manage an early breakthrough. Dimuth Karunaratne inside-edged a ball from Steven Crook onto his thigh pad and was caught at gully by Kyle Coetzer to leave Sri Lanka one for one.

But new batsman Kumar Sangakkara was quickly into his stride, the left-hander cutting and driving Crook for two well-struck boundaries. Sangakkara had looked in no trouble at all when, to medium-pacer Coetzer’s fourth ball, he hoisted a long hop to deep long leg where Chad Barrett took a well-judged catch in the swirling breeze. The veteran exited for 28, including five fours.

Mahela Jayawardene, in at 53 for two, soon restored order on a placid pitch by off-driving Barrett for four and clipping a legside full toss from Scotland captain Coetzer for another boundary, and when left-arm spinner Graeme White came on, Jayawardene lofted him for an off-driven four.

At lunch Sri Lanka were 103 for two, with opener Silva 38 not out and Jayawardene, one of the world’s leading batsmen, unbeaten on 35 off just 33 balls including six fours. But soon after the resumption, and seemingly well set, Jayawardene was out for 46 when he tried to uppercut a lifting Steven Crook ball that cramped him for room and Matt Spriegel in the gully took an excellent leaping catch above his head.

Next ball Thirimanne, who’d won the toss, edged a full length Cook delivery but wicketkeeper Ben Duckett, going to his left, dropped the chance despite getting both hands to the ball. The compact Silva pulled Coetzer for four to complete a 123-ball fifty while left-hander Thirimanne square-cut spinner Spriegel to the boundary to reach the landmark in 84 balls with seven fours. Sri Lanka rested tour captain Angelo Mathews but otherwise the tourists were fielding close to a full-strength side. 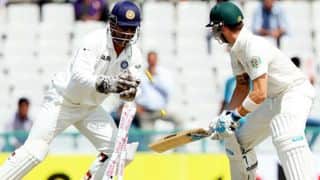