Jadhav now travels with his assistant and the bouncer. Wherever he goes, be it his favourite restaurant in Pune, Vaishali, or anywhere else, he first checks with the bouncer if it is okay for him to get inside.

Indian batsman Kedar Jadhav recently attained stardom after his heroics in the One-Day International (ODI) series against England. Though he had made his ODI as well as Twenty20 International (T20I) debut a relatively delayed one at the age of 29 back in 2014, it was only during the recently concluded series that he made a mark for himself. Batting at No. 6, Jadhav finished the three-match series with 232 runs at an average of 77.33 and with the Man-of-the-Series award. He hit a brilliant hundred in the successful chase of 351 and even out-shined skipper Virat Kohli, who too scored a hundred, in stroke-making. In the final ODI as well, Jadhav s 90 runs kept India in the hunt till the last over.

However, with his dismissal, India lost the game. The Maharashtra captain though rose in stature. He got his runs in the series at a whopping strike rate of over 144. And though he is not a part of the ongoing T20I series against England, quite ironically, Jadhav is having a quiet time away from cricket. With new-found stardom, the batsman is finding it difficult to manage on his own these days. He gets identified quickly and surrounded by mob wherever he goes. To deal with this situation, he has hired an assistant and a bouncer, according to a mid-day report.

Jadhav now travels with his assistant and the bouncer. Wherever he goes, be it his favourite restaurant in Pune, Vaishali, or anywhere else, he first checks with the bouncer if it is okay for him to get inside. Once he gets a clearance from his support staff, then only the diminutive batsman visits the place.

Life certainly has changed for the batsman, who may not be a part of the T20I squad at the moment, but is a definite starter in the playing XI for Champions Trophy, which will be played in England from June 1. 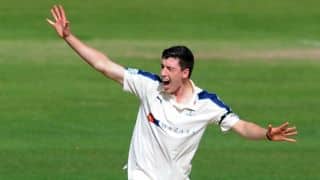