Chasing 258 against Afghanistan, Pakistan reached the target with three deliveries to spare thanks to an unbeaten 43-ball 51 from Shoaib Malik.

Pakistan edged Afghanistan in a last-over thriller at the Sheikh Zayed Stadium in Abu Dhabi on Friday. Chasing 258, Pakistan reached the target with three deliveries to spare thanks to an unbeaten 43-ball 51 from senior batsman Shoaib Malik.

The game was evenly poised when Pakistan needed 29 runs from the final three overs. Pakistan reduced the equation to 10 off the final six balls after taking 19 runs from two overs. Malik then sent the Pakistan fans into wild celebrations with a six and four off the second and third delivery to seal a nervy three-wicket win.

” being a senior player when you’ve played enough cricket, you know when you already have a start, the goal is to bat till the 50th over,” Malik explained his approach at the post match presentation. “That’s the only thing I had in mind. At one point the required rate was almost ten but I kept telling myself to bat till the end because we had batsmen to hit the big shots later.”

He further added, “I think even the good bowlers, when they’re bowling in the middle overs, they are confident and want to get you out. But in the end, even they are on the back foot. As a batsman, you can show authority on them. I would like to congratulate Afghanistan. They have been improving every day.”

Pakistan captain Sarfraz Ahmed was all praise for Malik saying winning a close game will give them confidence for the upcoming matches [against India and Bangladesh].

“Credit to Babar [Azam] and Imam [ul-Haq] for showing patience. It wasn’t easy to chase such a total on a pitch against some of the best spinners in the world. The way Shoaib played till the end was fantastic,” Sarfraz said.

Afghanistan captain Asghar Afghan rued the dropped catch of Malik by wicketkeeper Shahzad Khan when he was batting on 11. “If Malik’s catch had been taken, it would have become easy for us. But when you give a chance to a mature batsman, it becomes difficult. Today Hashmat and I played really well, because we wanted a good score. Our fielding and seam bowling wasn’t up to the mark today. Congratulations to Pakistan,” Asghar said. 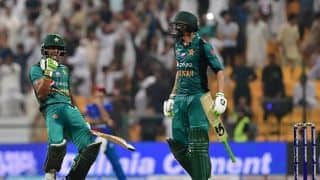