On a day widely expected to see Dale Steyn surpass Shaun Pollock s mark of 421 to become South Africa s all-time leading Test wicket-taker, it is left-arm spinner Keshav Maharaj who has made headlines. In his 22nd Test match, Maharaj stunned Sri Lanka with figures of 8/116 to soar to seventh place in South Africa s list of best figures in an innings.

Maharaj has become the sixth South African bowler to manage eight wickets in a Test innings, after Hugh Tayfield (twice), Goofy Lawrence, Tip Snooke, Allan Donald and Lance Klusener (see table above for all-time best figures by South African bowlers). Klusener was the last to manage this achievement, taking 8/64 on debut against India at Eden Gardens in 1996.

With Sri Lanka ending the day on 277/9, Maharaj will hope to emulate Tayfield in taking nine wickets. Steyn, needing one wicket to move past Pollock s record of 421, went wicketless across 14 overs.

Maharaj s previous best of 6/40 was surpassed when he claimed his seventh wicket of the day, having Dilruwan Perera caught sweeping to backward square leg. His eighth came in the same over, when Sri Lanka s captain Suranga Lakmal was stunningly held by Aiden Markram at short extra cover, diving and grabbing an uppish dive with one hand. These wickets came during a crippling spell of 7-2-25-4 in the final session of play.

Earlier in the day, Maharaj had snapped a 116-run opening stand by having Dimuth Karunaratne (53) caught down the leg side by Quinton de Kock. His second wicket was the other opener, Danushka Gunathilaka, who was well held by a diving Rabada at deep square leg.

Thereon, through a mixture of tidy and teasing left-arm spin, and some impetuosity from Sri Lanka s batsmen, Maharaj ran through the batting order.

Kusal Mendis swept out to deep mid-wicket for Rabada to hold a far easier catch; Angelo Mathews nicked to Faf du Plessis at first slip; Niroshan Dickwella made a mess of an attempted sweep and gave du Plessis another catch at slip; and Dhananjaya de Silva (60) was trapped lbw by a slider. 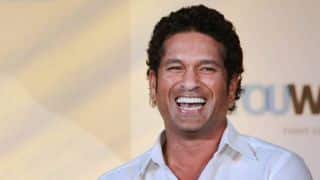