He told Ponting this had now changed.

Exiled batsman Kevin Pietersen says he is still in the dark as to why England dumped him and remains determined to force his way back into the team.

The controversial 34-year-old was dropped last February and subsequently released an autobiography in a blaze of publicity claiming the England dressing room had been beset by a bullying culture.

“I was sacked… I don’t know why I’m not playing for England. I haven’t got a clue,” he told former Australian skipper Ricky Ponting, now a commentator, in a wide-ranging interview during an Australian Big Bash League broadcast on Tuesday night.

“Never (have I been given a reason). They’re not allowed to — for legal reasons, they’re probably weren’t allowed to, and they still haven’t embellished on anything.

“(But) I know that the current captain would love to have me in the England team.”

Eoin Morgan replaced Alastair Cook as skipper of the one-day side in December in the lead up to next month’s World Cup in Australia and New Zealand and had previously spoken out in defence of Pietersen before taking the role.

When pressed on his assertion that Morgan would welcome him back into the fold, Pietersen, who is playing for the Melbourne Renegades in the Big Bash, did not back away from the claim.

In his book, South Africa-born Pietersen blasted former coach Andy Flower and several players, saying a “bullying culture” had been created in the dressing room. Other players denied the claims.

He told Ponting this had now changed.

“The majority of those guys are gone — they’re not in the side anymore,” he said, adding that he wants to play for England again.

England play a triangular one-day series this month against Australia and India ahead of the World Cup. They face a Prime Minister’s XI in Canberra later Wednesday. 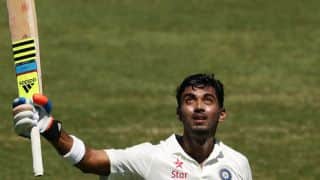