When the cricket is done I never hang around in Australia.Once the job is finished I am out of there said Pietersen.

Sacked England batsman Kevin Pietersen has said one of the things he “loved” about playing in Australia was the competitive brand of cricket played in the country.

He claimed that if someone has to toughen up his temperament, he should play in Australia and got a first-hand taste of the attitude in the club matches he played in 2001-02 in the country.

“I played a game of club cricket in the first couple of days that I got here (in December), and I remember from 2001-02 in my club season here how competitive Aussies are,” Pietersen was quoted as saying by the Cricket Australia website Wednesday.

“And I’ve known that throughout my Test career and throughout my one-day career, so I knew it was going to be a tough experience here. But if you want to go and play cricket. If you want to toughen up, this is where you come and play.”

This comes as a sharp contrast to what the 34-year-old had written in his book “KP: The Autobiography”, how he would leave Australia as soon as he was done playing cricket stating he felt “like a bat out of hell”.

“When the cricket is done I never hang around in Australia.Once the job is finished I am out of there like a bat out of hell – there’s just too much abuse,” wrote Pietersen. 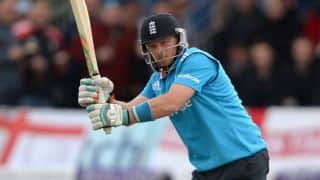 Ramnaresh Sarwan blasts out at West Indies Cricket Board