Murali Vijay set the tone for the chase before Pietersen took Delhi to their second win of IPL 7.

Delhi Daredevils made heavy weather of a fairly easy target  to take a  six-wicket win against Mumbai Indians in the 16th match of the Indian Premier League (IPL) 2014 led by solid knocks from Murali Vijay and Kevin Pietersen to take Delhi to their second win of the tournament while Mumbai slumped to their fourth consecutive defeat.

Earlier, Delhi bowlers bowled creditably to tie Mumbai for the better part of the game before useful cameos from CM Gautam and Harbhajan Singh with Kieron Pollard lifted the defending champions to 125 for six. All the Delhi bowlers chipped in with useful contributions.

Chasing a modest total of 126, the Delhi batsmen got off to a positive start and looked to make easy pickings of the target. Lasith Malinga bowled the first over for Mumbai and after some early weathering of the storm, Quinton de Kock flicked the last ball through the square leg region for a boundary and Delhi’s chase was on.

Rohit Sharma summoned Harbhajan Singh to bowl the fourth over of the match and de Kock played a wonderful cut shot to the boundary and the Delhi were growing in confidence . To rub salt in Delhi’s wounds, Lasith Malinga’s slower wide ball slipped though wicketkeeper Aditya Tare’s grasp and hit the stumps for five penalty runs plus the one run for the wide. The sixth over was also bowled by Harbhajan and it was a wonderful over which had de Kock all at sea.

With Vijay and de Kock going strong at the crease, Mumbai needed a breakthrough to get things going in this game and their prayers were answered when de Kock slash was caught brilliantly by Michael Hussey, turning back the clock. JP Duminy was the new man in and with Vijay had the onus of  calming things down at the crease.

Vijay’s previous knock had done him a world of good for his confidence  and the Tamil Nadu opener started playing his shots. Ojha came back to finish his overs and Vijay tore him apart for a four and a six. Just when hopes seemed lost for Mumbai, skipper Rohit Sharma’s forgotten tricks with the ball came to the fore with a beautiful off-spinner outfoxing Vijay’s defence and the defending champions got their much needed breakthrough.

With the pitch still gripping and getting plenty of turn and for a brief while, Ojha and Rohit were dictating terms and the runs had dried down. The fifteen over of the match changed the complexion of the chase with Pietersen using his feet and tearing into Rohit. Two fours and a six came 0f the over and the target was getting nearer. Delhi shot themselves in the foot though when their pick of the tournament JP Duminy played a lazy chip to covers off Malinga to substitute fielder Apoorva Wankhede and in the same over Dinesh Karthik also fell cheaply after his flick only reached Ambati Rayudu.

With two quick wickets, Delhi were under a bit of pressure and Pietersen needed to take his team home. A lofted shot almost found the diving long-on fielder Corey Anderson and the discarded Englishman survived. Kedar Jadhav played with nerves of steel towards the end and hit the winning runs to take Delhi across the finish line.

Man of the Match: Murali Vijay 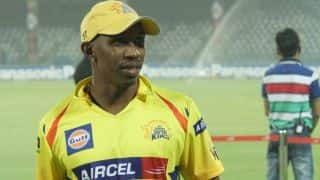