Kevin Pietersen is currently playing for Surrey in the English County.

England out-of-favour batsman Kevin Pietersen appears to have come out of his celebrity status as he is apparently travelling by metro services instead of his Ferrari machine to beat London’s notorious traffic, and catch up county games in his bid to earn a comeback into the national squad. Kevin Pietersen fastest to 1,000 First-Class runs for Surrey

Pietersen has been out of the national squad since his central contract was cancelled 13 months ago by the England and Wales Cricket Board (ECB) following the team’s Ashes washout by Australia. The maverick batsman turned down a lucrative Indian Premier League (IPL) contract with the Sunrisers Hyderabad (SRH) team to concentrate on his county campaign with Surrey. Did not relish Kevin Pietersen’s sacking, says former ECB Managing Director

Pietersen boarded a metro train in order to get back to his home in Wentworth after the end of the play against Essex on Monday. While posting a photo of the crowded carriage on his Twitter account, the sacked batsman tweeted ‘Only standing room left on this service – awesome.’ Kevin Pietersen a true professional, says Gareth Batty

Explaining his decision to travel by train, the batsman said that he was not a celebrity but a sportsman, insisting that he would rather prefer travelling in the train than sitting congested on the M4, Stuff.co.nz reported. Pietersen also said that his Ferrari couldn’t fly and therefore travelling by train was the quickest way to get home and beat London traffic. Kevin Pietersen slams crucial half-century for Surrey vs Glamorgan 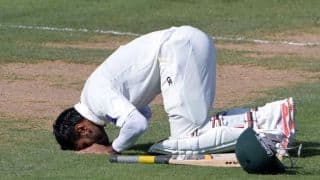