Kevin Pietersen revealed that the ECB did not like him and Ashley Giles being close friends.

Kevin Pietersen insisted on Monday he’d felt a sense of “relief” to be out of the England dressing room after his controversial exit from the side. However, England’s all-time leading run-scorer across all formats said he had good relations with his old team-mates and said he believed the reason why former England spinner Ashley Giles was overlooked for the role of national head coach was because of their friendship.

Despite being the team’s leading scorer in their 5-0 Ashes 2013-14 thrashing in Australia, Pietersen was dramatically ditched from the England set-up upon the side’s return. Former England captain Pietersen said he was “grateful” for his international career but that he has now “moved on”.

“In fact, it has been a relief to be out of the dressing room because it was not a pleasant place in Australia,” Pietersen wrote in a column in Monday’s edition of Britain’s Daily Telegraph newspaper.

“We were losing and in my opinion the environment was poor and I was not alone in thinking that. It is a view shared by a number of the players who have spoken their minds since coming back from the tour.”

Pietersen said his relationship was “fine” with fellow senior England players such as Stuart Broad and the now retired Graeme Swann.

“I have no issue with the players, as many have said in interviews since the tour ended. I speak to Stuart Broad and I even organised for Graeme Swann to go on holiday to one of my friend’s hotels after he retired.”

South Africa-born Pietersen was accused by some critics of a reluctance to “grind out” runs in Australia, but he was adamant he was best playing in the attacking style that had served him so well throughout his career.

“It would have been easy for me to start defending a bit more,” he said. “Would that have made me a better player? No. I am a risk-taker in cricket, in business and all parts of my life.”

Reflecting on his time with England, Pietersen added: “Fourteen years ago, I was an off-spinner from Pietermaritzburg who did not know where his life was going. Now I have played 104 Tests, batted at all the best grounds in the world and been lucky enough to score hundreds everywhere.

“Could I play more Test cricket? Yes of course, but should I sit here thinking I should be playing on Thursday [against Sri Lanka at Lord’s]? No, because that is when jealousy and negative thoughts come into your head.”

Pietersen’s fall out with then coach Peter Moores led to him being stripped of the England captaincy and Moores being sacked. Moores is now back for a second spell in charge, with Pietersen saddened his friend and fellow Ashes 2005-winner Giles, who was England’s one-day coach, wasn’t promoted to the head coach role.

“Sadly I think he [Giles] was just too close to me for the England and Wales Cricket Board‘s (ECB’s) liking. That is the problem. He had spoken too positively about me in Australia for the ECB to give him the job. It is a shame for both sides.”

Last month, ECB managing director Paul Downton said the 33-year-old Pietersen appeared “disinterested” and “distracted” in the fifth Test in Sydney, and added he was unable to find anyone within the England squad who wanted him to remain in the team.

The ECB subsequently admitted some of Downton’s comments were “in breach of the settlement agreement” made with Pietersen when his England central contract was terminated. 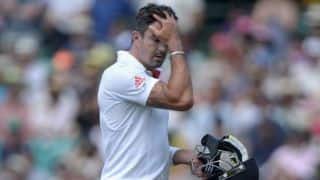