Kevin Pietersen shouldn't expect an international recall despite his return to county cricket.

Londres: Exiled England star Kevin Pietersen shouldn’t expect an international recall despite his return to county cricket, according to his Surrey coach Alec Stewart. Pietersen has rejoined Surrey to play in County Championship Division Two this season in a bid to win a Test recall for England’s Ashes showdown with Australia later this year.

The 34-year-old South Africa-born batsman was sacked by the England and Wales Cricket Board after the 2013-14 whitewash in Australia. ECB managing director Paul Downton insists Pietersen will not be brought back into the fold, while Test captain Alastair Cook rated the prospect “highly unlikely”, and former England opener Stewart agrees.

“If England are winning, they have a good West Indies tour which we expect, then it’s going to take an injury or a huge loss of form for a vacancy to become available,” Stewart told BBC Radio Five Live. “But all Kevin can do and, that’s what he’s said to us, he’s going to score runs, sit back and see what happens.”

Pietersen was reported to have fallen out with several senior members of the England squad before he was axed, but Surrey director of cricket Stewart claimed he has never had any problems with his attitude. “He’s been as good as gold with us. If he was a bad character we wouldn’t have had him,” Stewart said.

“Whenever he’s been with us he has been outstanding. He’s helped the youngsters, he’s been in the nets, he’s put on batting clinics and he’s tried his heart out. “So hopefully, and I have no reason to disbelieve it, he will be exactly the same this time, if not even more hard working and desperate to score runs.” 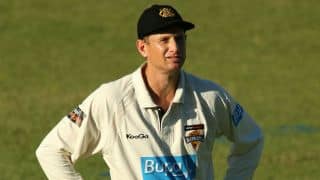