Kevin Pietersen signs up with Melbourne Stars for BBL

Kevin Pietersen signs up with Melbourne Stars for BBL

Pietersen will play for Melbourne Stars for two seasons.

Kevin Pietersen, the former England batsman, has signed up for the Melbourne Stars for the Big Bash League (BBL) Down Under. Pietersen has signed a two-year deal and would thus appear in the 2014-15 and the 2015-16 season. Pietersen would thus continue his journey of being a T20 traveller. He has already played for the Delhi Daredevils in the Indian Premier League (IPL) and is set to play for the St Lucia Zouks in the Caribbean Premier League (CPL).

Will be in Melbourne around 6/7/8 Dec…should be a fun couple weeks! #bigbash pic.twitter.com/f2T1TUVXPf

Shane Warne, Pietersen’s former captain at Hampshire played for the Melbourne Stars in the first two seasons of the BBL. Pietersen comes on as a replacement for the Sri Lankan Lasith Malinga, who cannot participate next season as his country would be building up to the 2015 World Cup. Pietersen walks into a very strong side, which comprises of the likes of Glenn Maxwell and Cameron White to name a few. 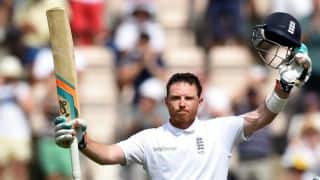 India vs England 2014, 3rd Test at Southampton: The ball in England’s court