England discard Kevin Pietersen on Sunday slammed a fine century, bolstering his claims for an international recall, while playing for Surrey against the Marylebone Cricket Club University (MCCU) at Oxford. Pietersen faced 110 balls and to score his century, which was studded with 14 boundaries.

Pietersen is desperate to make a comeback to international cricket, after he was unceremoniously axed form the England cricket team following their disastrous campaign in the Ashes 2013-14. Pietersen was made to look like the sole reason for England’s poor show Down Under, during a tour where their wheels came off and a rampant Australia pounded them 5-0.  Pietersen’s return rumours would disappear if Eng vanquish WI, feels Gooch

Pietersen, since then has been searching for answers and the reasons why he was sacked from the England side. While there was no concrete reason provided by the England and Wales Cricket Board (ECB) over his axing, there have been several reports in the media which suggested that there were differences in the English camp and even the board members were not happy with Pietersen and his attitude.  Kevin Pietersen lashes out at Graham Gooch

The 34-year-old, who is not leaving any stone unturned to make international comeback, even sacrificed the ongoing lucrative Indian Premier League (IPL) 2015, a tournament wherein he is still a hot property as well as among the most high profile player. Pietersen was picked up by the Sunrisers Hyderabad for Rs 2 crores in the IPL 2015 auction, which was held in February.

However, former England captain Andrew Strauss is not okay with the idea of Pietersen to be given another chance in the England team. “It’s very important for English cricket to move on from the Kevin Pietersen situation,” said Strauss. Kevin Pietersen is the best player I have ever played with, reveals Andrew Strauss

“That threatens to envelop everything at the moment. The story has become more of a distraction than actually him playing or not, it’s become that big,” he added. “The ECB and England team’s efforts to move on from him haven’t worked so far, [but] by winning, that will allow them to move forward,” IANS quoted Strauss as saying. 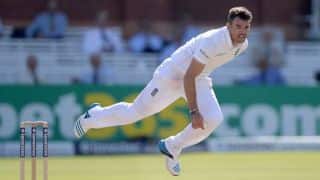